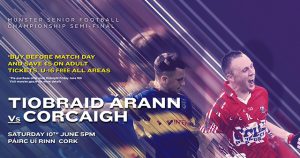 Cork defeated Tipperary by 1-10 to 1-9 in the Munster Senior Football Championship Semi-Final on Saturday June 10th at Pairc Ui Rinn.

Luke Connolly’s 70th-minute goal sent Cork into the Munster SFC final as Tipperary were edged out at Páirc Uí Rinn on Saturday evening.

Not since 1940 and ’41 had the Rebels been defeated by their Premier County counterparts in the football championship in consecutive years, but that seemed set to happen with Conor Sweeney netted for Tipp on 69, making it 1-09 to 1-10.

However, Cork held their nerve and the ball was worked through Michael Hurley, James Loughrey and Mark Collins, whose pass allowed Connolly to palm home.

Cork will know that work is needed ahead of the final, though. Peadar Healy’s side only managed one point in the first half, shooting nine wides, but their saving grace was that Tipp were also inefficient in front of the posts, registering four points, but with seven wides of their own.

Twice, Cork had good goal chances, with Colin O’Neill denied by a Ciarán Kenrick save in the second minute and Paul Kerrigan shooting wide on 10. When Conor Sweeney – Tipp’s attacking talisman after Michael Quinlivan was forced off injured in the first half – kicked two points on the resumption, Tipp were 0-6 to 0-1 ahead and Cork were up against it.

Even though they responded through Kerrigan and substitute Donncha O’Connor, Cork were still finding the Tipp defence difficult to pierce and a counter-attack after such a turnover gave Liam Boland a great chance. He was allowed to carry the ball deep into Cork territory and opted to go for goal, but Cork goalkeeper Ken O’Halloran saved with his legs. Had that gone in, Tipp would have had a 1-6 to 0-3 lead but, as instead, by the time they would score again, Cork had made a game of it.

'That wasn't football in the first half…but look, Cork are in a Munster Final' – Tomás Ó Sé on another stuttering Cork performance pic.twitter.com/bsKJtTlL9w

Captain Kerrigan led by example, rounding off a team move to get his second, and Luke Connolly, Mark Collins, and Barry O’Driscoll all scored in quick succession to make it 0-7 to 0-6 with 18 minutes remaining. Sweeney equalised, as he would do after O’Connor made it 0-8 to 0-7 with a free, but the introduction of Mark Collins helped to give Cork a presence in the middle and Kerrigan and O’Connor pushed them two clear by the 64th minute.

Tipp sub Kevin O’Halloran’s shot from distance landed just over the crossbar of his namesake Ken to leave just one in it coming down the stretch. When Sweeney palmed home a high delivery, the Cork faithful were shellshocked. But the Rebels produced a response.

The Cork team for the Munster Football Championship Semi-Final has been announced… https://t.co/r2PZoTz64c

The Tipperary team to play Cork in the Munster Senior Football Championship Semi-Final in Páirc Uí Rinn at 5pm this Saturday evening, June 10th, has been announced by manager Liam Kearns and lines out as follows –

They meet for a second successive year, with Tipperary having won last year’s semi-final by two points in what was their first championship success over the Rebels since 1944.

*Cork beat Waterford by 1-12 to 1-11 in this year’s Munster quarter-final; Tipperary will be having their first championship outing
*Tipperary were promoted from Division 3 as champions this year, winning six of eight games. Cork finished fourth in Division 2, winning two, drawing three and losing two of seven games.
*Managers, Peadar Healy (Cork) and Liam Kearns (Tipperary) are both in their second seasons.
*Peadar Healy’s League and Championship record since taking over as Cork manager at the start of last season reads: Played 19; Won 8, Lost 8, Drew 3.
Liam Kearns’ record with Tipperary in the same period is: Played 21, Won 11, Lost 7, Draws 3.

Don’t forget to pick up a copy of Saturday’s souvenir match programme.