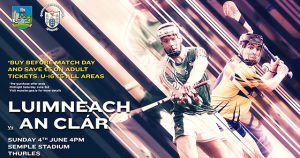 Clare defeated Limerick by 3-17 to 2-16 in the Munster Senior Hurling Championship Semi-Final on Sunday June 4th at Semple Stadium Thurles.

Clare are through to a first Munster senior hurling final since 2008, after scoring a four-point victory over Limerick in Thurles this afternoon.

Shane O’Donnell struck two early first half goals and Conor McGrath netted in the second half as the Banner men set up a July 9 meeting with Cork or Waterford.

It’s Clare’s second successive championship victory over their neighbours, having beaten them in last year’s All-Ireland qualifier. Clare could even afford the luxury of a missed Tony Kelly penalty with two minutes of normal time left.

And while David Reidy hit four pointed frees, he also sent a number of efforts wide in the second half. But Limerick, who head for the qualifiers, will rue a huge tally of 11 first half wides. And after coming from eight points down to level, with an unanswered run of 1-5, they allowed Clare to regain the advantage approaching half-time.

Having been reeled in, Clare hit five unanswered points before the interval, to lead by 2-10 to 1-8, in front of 19,168 spectators. It was O’Donnell who had provided Clare with an early platform, recapturing his 2013 All-Ireland final replay hat-trick form with a sensational opening quarter of an hour.

O’Donnell netted in the fifth minute, taking advantage of indecision in the Limerick full-back line when goalkeeper Nickie Quaid could only half-clear John Conlon’s effort which dropped short. O’Donnell was on hand to send a ground-stroke to the net and in the 14th minute, he struck again to hand Clare a 2-2 to 0-3 lead.

O’Donnell followed up with a point and when Colm Galvin and Reidy (free) added further scores, Clare were eight ahead – 2-5 to 0-3. That was Limerick’s cue to come alive and they did, drawing level with 1-5 in five minutes.

After points from Peter Casey and Cian Lynch (2), David Dempsey goaled in the 22nd minute, profiting after Andrew Fahy popped Lynch’s effort into the air. Fahy will feel he should have done better but the goalkeeper, making his full Munster senior championship debut, had done well a couple of minutes earlier to keep out Kyle Hayes.

Shane Dowling (free) and Paul Browne hauled Limerick level with scores – 1-8 to 2-5 – but Clare took over again before half-time and notched five points. In the second period, Clare comfortably kept Limerick at arm’s length, as the played with a slight breeze towards the Town End of Semple Stadium.

Limerick tried desperately hard to work their way back into contention and were within three, 1-12 to 2-12, before more hesitation in defence allowed in McGrath for a 51st minute goal. Clare went on to lead by eight points again and were in cruise control down the home straight. Quaid conceded a penalty after fouling Clare sub Aaron Cunningham but Kelly drove the penalty low and wide.

It mattered little as the game was done and dusted but there was some late cheer for Limerick when Hayes, making his senior championship debut, netted in the final minute.