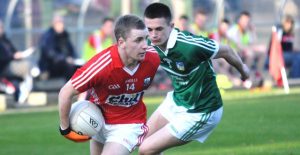 Cork were far too strong for Limerick at Pairc Ui Rinn last night as they cruised to a 23-point victory. This was a non-event from the very start, with a goal and a point from Michael Hurley putting Cork into a commanding position inside two minutes and from there they set about ensuring that Limerick had no way into the game. Limerick did not open their account until the 22nd minute through Mikey Morrissey by which stage they had conceded 3-10.

Shane Kingston was the source of five of those points and two goals in quick succession, from Damien Buckley and Hurley, had put the outcome beyond doubt even at such an early stage. Sean O’Donoghue added a fourth goal shortly before half-time and Cork led 4-11 to 0-2 at the break. Limerick deserve credit for not giving up and late on their brightest star, Morrissey, scored a consolation goal.

Next Round – the winners play the winners of the second Play-Off game in the Munster Semi-Final on May 7th or 14th. The losers will play the losers of Clare v Kerry on April 23rd or 24th.

The Cork Minor Football team to play Limerick in the Munster Championship at 7pm on Wednesday night at Páirc Uí Rinn will line out as follows:

Only two of the Cork Minor Football team that lost out to Tipperary in the 2013 Championship will start against Limerick on Wednesday night – Castlehaven’s Michael Hurley, brother of Senior star Brian, and captain Kevin Flahive. The three seventeen-year-olds on the starting fifteen, Seán Powther, Shane Kingston and Tom Bushe, have all come up through the Rebel Óg Academy, featuring on last year’s U16 Development Squad. Daniel Meaney and Seán O’Donoghue, who captained Coláiste Choilm to win the All-Ireland Post-Primary Schools Senior B Final on Saturday, started for the Cork Minor hurlers against Kerry in this year’s Championship, while Martin Collins and Shane Kingston are also on the hurling panel. Cian Kiely also played on the All-Ireland winning Coláiste Choilm team on Saturday.