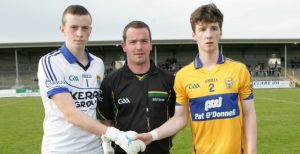 Kerry got their campaign off to a good start at Cusack Park, Ennis as they cruised to a comfortable victory over Clare. A 0-8 to 0-3 lead at the break was no more than Kerry deserved and with the wind at their backs in the second half, they forged further ahead. With Barry O’Sullivan and Mark O’Connor outstanding in the middle, Jack O’Connor’s youngsters built on this dominance to carve out the win.

Clare opened the scoring in the sixth minute when wing-forward Keelan Sexton landed a free-kick from 50 metres. Kerry’s Jordan Kiely levelled matters with a fisted effort. The sides were tied at 0-3 apiece by the 12th, but five unanswered Kerry points before the break gave them the platform. Kiely grabbed Kerry’s first goal eight minutes after the restart when he was fed by substitute Stephen O’Sullivan and the second goal arrived in the 49th minute. Killian Spillane – from the famous Templenoe family – also tortured Clare, while Kiely can be happy with his 2-3 personal tally.

Next Round – the winners play the winners of Waterford v Tipperary in the Munster Semi-Final on May 7th or 14th. The losers will play the losers of Cork v Limerick on April 23rd or 24th.

Kerry Minor Team v Clare
Three of the side defeated by Tyrone in last year’s All Ireland quarter final have been named in the Kerry Minor Football Team to play Clare in the Electric Ireland Munster GAA Minor Football Championship Round 1 in Cusack Park Ennis on Wednesday April 16th at 6:30.
The team is as follows and the captain will be named at a later stage: