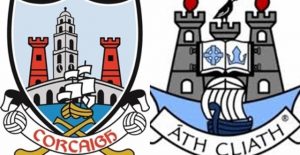 Dublin defeated Cork by 2-20 to 2-13 in the Allianz Football League Division 1 Semi-Final on Sunday April 13th at Croke Park.

Dublin blow Cork away in second half storm

Dublin delivered a huge statement of their intent for the year ahead with a hugely impressive Allianz League semi-final defeat of Cork at Croke Park on Sunday afternoon.

After being totally outplayed in the first half, and conceding two early goals, Dublin trailed by eight points at the beak and went 10 down at the start of the second half. However, a lucky Michael Darragh Macauley goal in the 40th minute sparked a quite remarkable turnaround. By the 53rd minute, Dublin were still 2-13 to 1-11 down, but they hit 1-9 without reply, including a 65th minute Diarmuid Connolly penalty, in the closing stages to seal an incredible win.

“We just couldn’t get the ball past midfield and it was wave after wave of attack. They had momentum,” admitted a stunned Cork manager, Brian Cuthbert afterwards, Cork looked to have had the game won inside the first seven minutes. Colm O’Neill smashed home a trademark shot after a superb move involving Paul Kerrigan and Daniel Goulding, before the Rebels snaffled a second goal when Dublin ‘keeper Stephen Cluxton failed to deal with a high Brian Hurley ball and allowed Mark Collins to tap into the empty net.

Having scores two early goals in their Round 7 defeat of Tyrone last week, Dublin were rocked as they trailed by 2-2 to 0-2 after seven minutes.
Hurley, the Castlehaven star, scored five brilliant points from play in the first half and might have had a goal on 25 minutes after he was played through by an incisive Donncha O’Connor pass, but the burly full-forward smashed over the bar instead.

Dublin brought Eoghan O’Gara off the bench in place of Jason Whelan on 26 minutes and he made an impact with two points before the break. However, the irrepressible Hurley struck his fifth of the afternoon just before the whistle to leave the Rebels 2-9 to 0-7 ahead at half-time. Cork added to their tally at the start of the second half with scores from Jamie O’Sullivan and Daniel Goulding before the Dubs got a massive stroke of luck on 40 minutes when Philly McMahon’s shot struck a post and fell into the grateful arms of Macauley, who finished superbly.

The goal sparked Dublin into life. Davy Byrne blazed over the bar and substitute Bernard Brogan lofted over two frees before Paddy Kelly gave the Rebels some reprieve with a score in the 53rd minute. It proved to be their last of the game.Dublin had the bit between their teeth and Paddy Andrews and Jonny Cooper hit the target before Macauley had them level on the hour mark. Andrews and Alan Brogan nudged the champions ahead before Connolly slotted home from the penalty spot after James Loughrey had fouled Bernard Brogan. The game was already over, but Dublin added further scores from Ciaran Reddin and Bernard Brogan at the death to rub salt into Cork’s open wounds.
***
Scorers for Dublin: D Connolly 1-2 (1-0 pen, 0-1f), MD Macauley 1-1, P Andrews 0-4, E O’Gara 0-3, B Brogan 0-3 (0-3f), J Cooper, A Brogan, D Byrne, C Reddin, K McManamon, P Flynn 0-1 each.