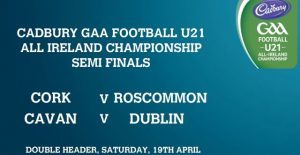 Roscommon defeated Cork by 1-19 to 3-12 in the Cadburys All-Ireland Under 21 Football Championship Semi-Final on Saturday April 19th at O’Moore Park Portlaoise.

Report: Diarmuid Murtagh point wins it for @gaaroscommon at the end of a remarkable U21 semi-final v Cork: http://t.co/kcvk0dHGla … #GAA

Murtagh wins it at the death for Roscommon

A brilliant free from Diarmuid Murtagh with the last kick of the game gave Roscommon victory in an extraordinary All-Ireland U21 semi-final against Cork in Portlaoise on Saturday.

It was a fitting seal to a wonderful individual display from Murtagh, who finished with 0-10, and a reprieve for Roscommon, who looked like they had dramatically thrown the game away, coughing up a six-point lead to Cork in the final minutes before Murtagh rescued them. Ultan Harney’s brilliant 52nd minute goal looked like it had given Roscommon the win, but a brilliant Dan Mac Eoin goal, directly from a free in the last minute, brought Cork dramatically level with time almost up. However, Murtagh completed a glorious individual day by nailing the pressure kick, and the huge Roscommon crowd rejoiced with rapture as they celebrated reaching a second U21 All-Ireland football final in the space of two years.

Roscommon led 0-11 to 0-5 at the end of a first half in which they ended up completely dominating their opponents. The first 12 minutes were even enough, with the sides level on 0-4 apiece at the end of them. Mac Eoin kicked a couple in that early period for Cork, while Murtagh and Donie Smith were on target for Roscommon.

It was in the second quarter that Roscommon really took control of the game though as unanswered points from Murtagh (2), Ciarán Kilcline, Smith, Ronan Daly and Harney left the Connacht champions six clear with half-time looming. Cork ended a 20 minute scoreless with a MacEoin free before the break but another gem from Murtagh, his fourth of the half, kept Roscommon’s six point lead for the second half.

Cork were much improved after the restart, and a well taken goal from the impressive Mark Sugrue on 33 minutes gave them hope. An Alan Cadogan point cut Roscommon’s lead further, but then Murtagh went on a free-scoring burst, kicking four frees without reply to re-establish a six-point lead on 40 minutes. Cork edged back into the game again though, and a well-taken Cadogan strike on 49 minutes left them just two behind at 0-17 to 2-9. However, Roscommon replied brilliantly.

They worked a superb point, with Mark Healy finishing a great team move, and then a similar move moments later ended with midfielder Harney smashing the ball to the top left corner to put Roscommon six ahead again with seven minutes to go. Cork clawed their way back into it ominously, with Sugrue knocking over a couple of points, but Roscommon still looked to be heading for the victory.

The Cork U21 Football team to play Roscommon in the Cadbury All-Ireland Semi-Final on Saturday at 3pm in Portlaoise will line out as follows:

Seán Hayes and his selectors have kept faith with the team that defeated Tipperary in the Munster Final, naming an unchanged team for the All-Ireland Semi-Final on Saturday.