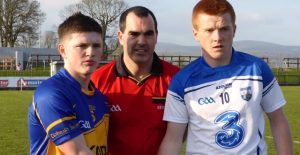 Bergin double tilts it for Tipp

Jamie Bergin’s second goal, five minutes from time, proved the game-changer as Tipperary advanced to the minor semi- final at Fraher Field. Waterford, inspired by man of the match Conor Gleeson, recovered from four down to lead with nine minutes left. Padraig White then levelled it before Bergin pounced.

Waterford got off to an ideal start when Gleeson’s effort in the seventh minute dropped into the net. Tipp blasted 1-4 without reply during the second quarter and silenced Gleeson momentarily. Bergin rattled the net on 16 minutes, while Tommy Nolan, Jack Skehan, White (free) and Emmet Maloney had points. Cormac Curran hit Waterford’s first point on 15 minutes. Jack Kennedy maintained Tipp’s four-point lead at the break. Ross Peters then restored Tipp’s half-time lead (1-8 to 1-4) and Gleeson then hit an unstoppable shot to the net. A brace from Mullaney and another from Michael Sweeney put them 2-7 to 1-9 ahead. White levelled on 54 minutes and then Bergin’s second goal sealed it.

The Tipperary team to play Waterford in Wednesday’s Munster Minor Football Championship has been announced. Four of the team which lost the 2013 Munster Minor Football Final to Kerry are once again eligible to play in this year’s competition and are named to start by manager Charlie McGeever, namely Jack Brady, Danny Owens, Paul Maher and team captain Willie Connors.