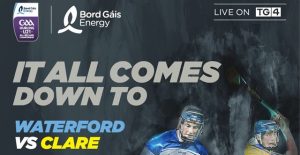 Waterford romped to an eighteen-point victory over Clare in tonight’s Munster U21 semi-final against Clare in sunny Walsh Park, writes Michael Moynihan. With home supporters in the sizeable attendance of 4,126 looking for some good news after their seniors heavy defeat in Sunday’s Munster final, they got plenty of comfort in an emphatic win, Waterford helping themselves to 3-13 in the second half alone.

The U21 grade lived up to its reputation for free-flowing play, with both sides hitting form and enjoying periods of fluid hurling but Waterford, All-Ireland minor champions three years ago, were far too strong for their opponents.

Waterford faced the stiff breeze in the first half and opened with a Patrick Curran free in the first minute, but Clare soon had three on the board, Kevin Hehir with two points and Ryan Taylor one.

On eight minutes a loose ball in the Waterford 20 metre line broke to Oisin Donnellan who goaled smartly; a Ben O’Gorman point immediately afterwards made it 1-4 to 0-1, and the visitors were winning duels all over the field, with Aidan McGuane and O’Gorman hitting plenty of ball.

Curran hit two frees to stop the rot for Waterford, who began to improve as DJ Foran placed Mikey Kearney for a point, but then David Conroy and O’Gorman hit super long-range points for Clare to stretch their lead to five points as the game hit the twenty minute mark.

This became the theme of the half – any time Waterford were able to make headway the visitors, with that strong wind behind them, picked off scores from distance to keep the men in white and blue at bay.

The home side hit back with a terrific Stephen Bennett point from the sideline but Clare restored their lead when Shane Gleeson intercepted a Waterford clearance and pointed, and they were six up when senior sharpshooter Aaron Shanagher opened his account. Shane Bennett burst through and had a sight of goal but pointed; from the puck-out Conroy hit another fine score.

With half-time approaching Waterford rallied – senior star Austin Gleeson hit a trademark sideline cut straight over the bar, then danger man Curran burst through and pointed. The pair then combined for Curran to win a free, and when midfielder Mark O’Brien pointed, it was 1-9 to 0-10 heading for the break.

Waterford were backed by the breeze and instantly turned it to account, Stephen Bennett crashing home a goal seconds after the throw-in: his brother Shane added a point from the Clare puck-out, Stephen hit a point a minute later and Waterford were three up, 1-12 to 1-9 on 32 minutes.

By now the home side were rampant, with the Bennetts terrorising the Clare defence. On 36 minutes a harmless ball rolled through the Clare defence for Stephen Bennett, who finished clinically. A long-range Gleeson point just afterwards and Waterford were 2-16 to 1-9 ahead and comfortable. A Bobby Duggan free was Clare’s eventual response, but it was their only score of the third quarter.

At the midway point of the second half Colm Roche soloed through to bury Waterford’s third goal, and the home side engaged in shooting practice for the rest of the game: Clare managed just two points in the second thirty minutes.

For Waterford senior management the result was a welcome boost ahead of their All-Ireland quarter-final date with Wexford on Sunday week. Based on tonight’s performance Derek McGrath et al will be wondering whether a fit Stephen Bennett would give them a spark up front, given the Ballysaggart’s goalscoring eye.

Big boost for @WaterfordGAA as they storm into Munster U21 final with win over Clare https://t.co/qd2fbhKECN pic.twitter.com/ID7cWEgJXk

The Waterford Under 21 Hurling team to face Clare has been named. Throw in on Wednesday evening in Walsh Park is at 7pm!

Clare U21 team to play Waterford on Wed next. pic.twitter.com/h06791KZ4R