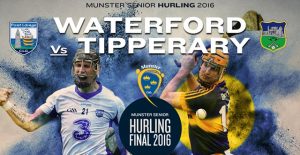 Tipperary defeated Waterford by 5-19 to 0-13 in the Munster Senior Hurling Championship Final on Sunday July 10th at the Gaelic Grounds Limerick.

Cyril Farrell has words of praise for Tipp manager Michael Ryan after the demolition of Waterfordhttps://t.co/MAWACYakAx

Report from the Irish Examiner newspaoer

Tipperary retained their Munster Munster Senior Hurling Championship title with consummate ease as John McGrath claimed a hat-trick of goals to end this game as a contest early in the second half , writes John Fogarty, GAA Correspondent. The 21-point margin equalled their winning gap over Waterford in 2011.

McGrath added two of them after the break, one from a penalty, to kill off a Waterford challenge that never truly ignited. Waterford will now face Wexford in an All-Ireland quarter-final on July 24, while Tipperary will be out again in an All-Ireland semi-final on August 14.

Leading 1-7 to 0-8 at half-time, Tipperary took full advantage of the wind in the second half when Darren Gleeson’s assisted deliveries caused no end of bother to the Waterford full-back line.

Not only did McGrath find the net twice but he also laid on another goal for Michael Breen, whose goal-scoring from midfield has become a major weapon for this Tipperary side. Seamus Callanan, enjoying more freedom as the game developed, added a fifth goal in the final minute of regulation time.

Waterford were the more aggressive team for the opening nine minutes but their confidence was rocked when McGrath took advantage of Stephen O’Keeffe’s failure to negotiate a tame Niall O’Meara shot. They recovered with the next three points but none of the came from play and by half-time they had registered just two outside of placed balls.

Their wide count of nine at the interval eclipsed their points tally of seven and they were unable to find their range for 20 minutes. In that period, Tipperary reeled off five scores, four of them frees as the Déise defence struggled to keep tabs on the movement of the Tipperary forwards.

Too often the Waterford attack were forced either to turn back and look for help. Other times they ran into cul de sacs or shot from low percentage areas. Tipp, on the other hand, kept the scoreboard ticking over as they found latitude with clever support play in a packed defence.

The Tipperary Senior Hurling team to play Waterford is as follows –

The Waterford Senior Hurling Team to face Tipperary on Sunday in the Munster Final has being named! Best wishes to Derek and all his team! #DeiseAbú

A limited number of stand tickets including juvenile tickets will be put on public sale for the Munster Senior Hurling Final from 12 noon on Monday, June 27th. They will be available online at http://gaa.tickets.ie and in participating Centra and SuperValu stores nationwide.

Terrace tickets will be freely available online and through participating Centra and SuperValu stores. Tickets will mainly be allocated to competing counties in the senior and minor finals and will be available through county boards and clubs.

Ticket prices are as follows
Covered (Mackey) Stand: Adult €35, Juvenile €5, Student/OAP: Purchase Adult tickets and receive a €10 concession at designated turnstiles prior to entry upon the production of valid ID

Uncovered Stand: Adult €30, Juvenile €5, Student/OAP: Purchase Adult tickets and receive a €10 concession at designated turnstiles prior to entry upon the production of valid ID

Please use the ticketing locator at https://munster.gaa.ie/ticketing-store-locator/ which is for Centra and SuperValu stores in the Munster counties only.

The venue for this year’s Munster Minor and Senior Hurling Finals is the Gaelic Grounds which is situated on the Ennis Road in Limerick.

Supporters are requested to take note of the following: –

• The Ennis Road will be closed to traffic.
• There is no parking in the vicinity of the Gaelic Grounds.
• Supporters are requested to arrive in Limerick at least 1½ hours before the senior match starts [4pm].
• Vehicles should be parked on the city (south) side of the River Shannon.
• Normal traffic flow should be restored approx. 1 hour after the senior match finishes.

The GAA have made provisions for Park & Ride from the following locations: –

Details of Limerick City parking can be obtained from www.limerickparking.ie

Vehicles parked illegally or causing an obstruction will be subject to tow-away operations.

The following is the Garda Traffic Management Plan to cater for the above Munster Hurling Finals, at the Gaelic Grounds, Ennis Road, Limerick City on Sunday the 10th July, 2016.

The Garda advice to patrons is to arrive in plenty of time to park up cars legally, i.e. not causing obstruction, on green areas or on locations where parking is prohibited. Cars illegally parked will be ticketed and those causing obstruction are likely to be towed away by Gardai.

Patrons are advised to use Street & Off Street Parking in the City and avail of the Bus Eireann service from Lower Henry Street to travel or to take the 15/ 20 minutes to walk out to the venue as they will be caught up in traffic if they cross the bridges in the City out to the venue.

The following road closures and diversions will be in place on Sunday 10th July, 2016.

They meet for a second successive year in the Munster final, with Tipperary bidding to repeat last year’s triumph when they won by five points (0-21 to 0-16) in Semple Stadium. This time it’s in the Gaelic Grounds, the first occasion the Limerick has venue has staged a Munster final between Tipperary and Waterford since 1963, when Waterford won by 0-11 to 0-8 in front of a crowd of 36,000.

PREVIOUS MUNSTER FINAL CLASHES
This will be the 11th Munster final meeting between the counties with Tipperary leading 8-2 from the previous ten clashes. Waterford’s two successes were in 1963 and 2002.

LAST COMPETITIVE CLASH
Waterford 1-18 Tipperary 1-17 (Allianz HL, 6 March 2016, Semple Stadium)
Tipperary led by 0-12 to 0-8 at half-time and by 0-14 to 0-9 after 45 minutes before Waterford launched a spirited revival, outscoring their rivals by 1-7 to 0-1 over the next 20 minutes. It was level in stoppage time before a long range point by Austin Gleeson clinched a Waterford win.

*Tipperary are seeking their sixth successive championship win over Waterford, who last beat the Premier men in the 2008 All-Ireland semi-final.