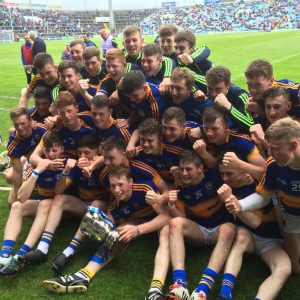 Tipperary defeated Limerick by 1-24 to 0-10 in the Electric Ireland Munster Minor Hurling Championship Final on Sunday July 10th at the Gaelic Grounds Limerick.

By Jackie Cahill at the Gaelic Grounds, Limerick for GAA.ie

On a miserable afternoon for Limerick, they were reduced to 14 players four minutes after half-time when Brian Nash was dismissed for a second bookable offence. That came shortly after a 33rd minute goal for Morris, a superb low effort past Mark O’Kelly after Paddy Cadell had somehow managed to get his pass away under extreme pressure.

From there until the finish, it was a procession for Tipperary as they cruised to a 39th Munster minor hurling crown. The writing was on the wall for Limerick from a long way out as Tipp looked the more fluent outfit.

They’ve come a long way in a short space of time under Cahill and watching them in action this afternoon, it’s almost remarkable to think that Tipp lost their championship opener to Waterford. But a do-or-die victory over Clare set Tipp up for a crack at Cork in the semi-final, a game they won at Páirc Uí Rinn, and their season opened up.

Today, they produced some brilliant hurling in difficult weather conditions to storm past Limerick, who admittedly had to play the vast majority of the second half a player light. At half-time, Tipp led by 0-13 to 0-7, with Fairbrother, Morris and Mark Kehoe prominent.

Limerick managed just six points from play on the day and that was never going to be good enough against a Tipp wide with scoring contributions from nine players. The sending-off ended any faint hopes of a Limerick revival and they were even denied a consolation goal late on. Sub Aaron Kennedy put the ball in the net but referee Rory McGann had already signalled for a 20m free, which was diverted out for a ’65.

Tipperary minor hurling team manager Liam Cahill has also named his side to face Limerick in their Munster Final clash which throws in at 2pm in the Gaelic Grounds.

Liam has kept faith with his side that started last week’s semi-final win, meaning Eoin Barry wears the no. 13 shirt having being called up before throw-in in that semi-final.