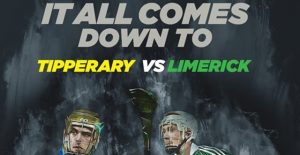 A 58th minute goal from sub Ronan Teehan was the crucial score as Tipperary dumped out All-Ireland champions Limerick, and, in the process, secured passage to the Munster U21 final later this month, writes Eoghan Cormican.

Tipperary, despite leading for the majority of the second period, were never able to move more than two points clear of their opponents, but clear daylight was established when Teehan whipped to the net two minutes from time to shove the home side 2-11 to 0-12 clear. Limerick midfielder Darragh O’Donovan responded with a superb goal in the subsequent passage, but William Maher’s side held on to complete a dream week for the county.

Limerick had returned back down the tunnel at half-time carrying the slenderest of margins, 0-8 to 1-4, and could have been further ahead but for seven first-half wides. The visitors, despite falling behind to an early Josh Keane free, hit the next three scores through Ronan Lynch (free), Seamus Flanagan and Pat Ryan to settle into proceedings.

Tipperary countered with three unanswered points of their own – Josh Keane (free), Conor Lanigan and Andrew Coffey on target; Limerick produced a second three-point burst to make it 0-6 to 0-4 after 27 minutes.

A rare opening in the Limerick defence in the subsequent action allowed the home side pour through relatively untouched, Andrew Coffey drilling a low shot to the net after good work by Stephen Quirke and Conor Lanigan.

The All-Ireland champions soaked up the goal and replied through Lynch (free) and Tom Morrissey to take control of the lead at the break. They weren’t able to hold it.

Congrats to Tipperary's Paul Maher, the #BGEU21 Man of the Match pic.twitter.com/edEPpCPGi2

The Tipperary team to play Limerick in the Bord Gáis Energy Munster U21 Hurling Semi-final this Thursday night in Semple Stadium at 7.30pm has been announced by manager William Maher.

In his fourth year at the grade Ronan Maher captains the side. Elsewhere, it’s a third term for Tom Fox and Barry Heffernan while Billy McCarthy and Willie Connors are the other stalwarts from last year.