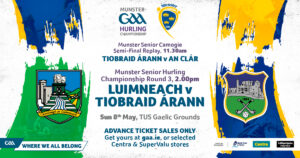 Clare defeated Tipperary by 1-11 to 0-10 in the Munster Senior Camogie Championship Semi-Final Replay on Sunday May 8th at the TUS Gaelic Grounds.

Clare will contest a first Munster Senior Camogie Final in a decade after finally seeing off Tipperary at the second attempt in TUS Gaelic Grounds on Sunday afternoon.

Following a compelling seesaw wrestle for supremacy in Thurles seven days previously, this time Clare were full value for a rare derby victory after setting the pace for the majority of the hour.

Indeed, finding themselves trailing by 0-7 to 0-6 at the interval, Tipperary edged into the ascendency for the only time in the 34th minute following back-to-back points from Nicole Walsh and Jenny Grace.

It only seemed to anger Clare who, led supremely by Niamh O’Dea, responded with a decisive 1-3 blitz in just six minutes capped off by an emphatic Lorna McNamara goal at 1-10 to 0-8.

It was the sides’ goalkeeping heroics that lit up the opening half as Clare’s Doireann Murphy smothered a Roisin Howard pull in the opening minute before surpassing it with a penalty save from Cait Devane in the 20th minute.

It ensured that Clare remained in the driving seat despite seeing a Lorna McNamara injury-time shot repelled by Tipperary goalkeeper Aine Slattery. Belying her inexperience in a debut season at senior level, McNamara would make amends with a 41st-minute goal to clinch a final showdown with four-in-a-row chasing Cork in Páirc Ui Rinn next Saturday (6pm).