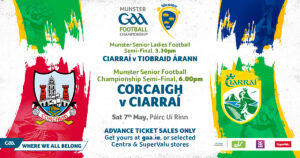 Kerry defeated Cork by 0-23 to 0-11 in the Semi-Final of the Munster Senior Football Championship on Saturday May 7th at Páirc Uí Rinn.

A Kerry victory but only after brave Cork restore damaged pride

An unanswered barrage of eight second-half points propelled Kerry to this slightly flattering victory over Cork in Páírc Uí Rinn this evening.

In front of a 10,743 crowd, Kerry took their time before unloading on their neighbours and will now face Limerick or Tipperary in a Killarney Munster final on May 28.

However the Cork hosts deserve some credit for making a game of it for three quarters of the tie.

The hosts were within a point up to the 51st minute and Kerry didn’t score from play in the second half until substitute Paul Geaney’s strike in the 55th. But that score stretched Kerry’s advantage to five points and 10 minutes later it had grown to nine.

On another difficult day against Cork, David Clifford had the only genuine sniff of a goal in the 61st minute but was thwarted by Dylan Foley introduced for Micheál Aodh Martin who retired with a groin problem.

Cork managed just two points from play in the opening half yet they were only two behind at the break, 0-7 to 0-9.

Steven Sherlock punished a spat of Kerry fouls in the opening quarter and had four converted frees to his name by the 23rd minute.

Kerry had to figure out how to unlock Cork’s rearguard, which was shored up well by Seán Powter who was in the wars on a few occasions. However, they opened up a three-point lead by the 20th minute, Seán O’Shea sending over back-to-back frees.

Cork, though, were back on level terms in the 28th minute. Sherlock registered their first score from play in the 26th minute and after Gavin White slipped up on the restart Cathail O’Mahony added a second. Sherlock then penalised a silly Jason Foley foul on O’Mahony.

Diarmuid O’Connor responded almost immediately and Tony Brosnan opened up his account in the 31st minute having missed a similar effort seconds earlier.

The game will be shown live on Sky Sports Arena.

🏐The Rebels and the Kingdom face off in the Munster SFC semi-final at Páirc Uí Rinn!