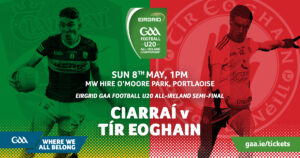 Tyrone defeated Kerry by 1-14 to 1-12 in the EirGrid GAA Football All-Ireland U20 Championship Semi-Final on Sunday May 8th at MW Hire O’Moore Park, Portlaoise.

Tyrone outscored Kerry by 1-8 to 0-5 in the last 25 minutes of their Semi-Final to qualify for their first ever EirGrid GAA All-Ireland Under 20 Football Final – watch highlights below on GAANOW! pic.twitter.com/Dc2BavBj3l

Report by Paul Keane for the Irish Examiner newspaper

Ciaran Bogue’s 58th minute goal was the difference as Tyrone secured their first EirGrid All-Ireland U-20 football final place since 2015, coming from behind to end Kerry’s title hopes.

Bogue finished with 1-2 though Ruairi Canavan, son of Red Hand legend Peter, was the inspiration throughout, scoring 0-8 and playing a key role in Bogue’s goal which ultimately broke Declan O’Sullivan’s Kingdom side.

It will be a difficult defeat to swallow for Kerry who only fell behind for the first time in the game when Bogue crashed his goal to the net late on.

Former All-Ireland minor winner Dylan Geaney did his best to haul Kerry back with a 63rd minute point, bringing his tally for the day to 1-4, but Tyrone held on for a two-point win and a final clash with Kildare next weekend.

Man of the Match Canavan will be a marked man for that contest having also led the destruction of Cavan in the Ulster final.

There were huge displays too from Eoin Corry in defence as well as Conor Cush who got through a tonne of work in attack.

Kerry had six points to spare when the counties met at the All-Ireland quarter-final stage of the 2019 minor championship though there was never more than four points between them this time.

It was tight and tense but hugely enjoyable as two classy sides duked it out in perfect conditions, trading blows and points in a riveting back and forth.

Kerry raced three points clear initially thanks to scores from Geaney and Kevin Goulding but scores in response from Bogue and Canavan indicated that Tyrone were up for the fight.

Goulding booted three terrific first-half points for Kerry to lead narrowly at the interval, 0-06 to 0-05, but they were back level again when Cush pointed after the restart.

Geaney’s 34th minute goal, after great work in the buildup from Cillian Burke, nudged the Munster champions three points clear and looked like it might be a turning point.

Another Geaney point, again set up by Burke, pushed Kerry four points clear but Tyrone’s response was impressive as they slowly ate into the deficit and eventually took the lead when Bogue netted, a move that began with Canavan striking a point attempt off the post.