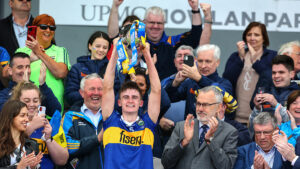 Report by Kevin Egan at UPMC Nowlan Park for GAA.ie

An incredible, thrilling final that will live long in the memory of everyone who attended concluded in the most dramatic finish imaginable this afternoon in Kilkenny, as Paddy McCormack’s late flash of the hurl sent Tipperary supporters into raptures and condemned Offaly to a heartbreaking defeat, despite the Faithful County looking like the stronger side for the vast majority of the hour at UPMC Nowlan Park.

At 1-15 to 0-12 in front with 53 minutes gone following an Adam Screeney free, with Tipperary down to 14 players due to a red card for Damien Corbett, few would have imagined that the Munster champions would find a way back into the game.

However with Offaly retreating in a bid to protect what they had, Tipperary stuck to their task manfully, chipping away at the lead one point at a time. With the four minutes of stoppage time expired and the gap down to two points, a free from 40 metres out of the Offaly goal was floated in by Paddy Phelan, and corner forward Paddy McCormack rose highest to flash his hurl and whip the sliotar past Liam Hoare for the game’s decisive score.

It was a conclusion that no-one could have seen coming. For 20 minutes, Offaly were marginally the better side, though they struggled to make it count on the scoreboard as they put eight of their first 15 shots wide of the target. Then, for the next 30, they took control. 1-3 without reply in the lead up to half-time left six between them at the interval, and while Tipperary rallied with three on the spin after the interval, Offaly settled again, picking off some crucial points from distance and inspired by two superb saves from Liam Hoare.

Yet for all that, they never did quite enough to shake off Tipperary, and moreover, Tipperary never played like a team that felt their dream of lifting the Irish Press Cup was out of reach, and their persistence was to yield a rich dividend by the time Shane Glynn sounded the final whistle.

These two sides came into the contest on the back of very different semi-final victories, with Offaly prevailing in a tense and tight battle with Clare, while Tipperary came through an epic shootout against Galway. If this game was to be decided by who dictated the early terms of engagement, then the Leinster champions were the team that looked to be on course for victory. Both sides had an extra man at the defensive end of the field, and with little or no space for the inside forwards, just four of the first ten points of the contest were struck from play. Gradually Offaly began to get some traction close to goal, where corner forwards Daniel Hand and Adam Screeney picked off superb scores, while Tipperary’s strength was in the middle third, with Adam Daly and Ciarán Foley both on the scoresheet from distance as the half progressed.

Forwards’ roles seemed to be as much about tackling and pressurising the opposition as much as it was about raising flags, and when three Tipp forwards combined to force a turnover and allow Daly to whip the ball over, that pushed the men in blue and gold ahead by 0-8 to 0-7.

The next five minutes seemed like it would define the contest.

Leigh Kavanagh won a puckout and set up Conor Doyle, Screeney shot two more unbelievable points, then Daniel Hand split the uprights from the left touchline. With stoppage time getting underway, a measured diagonal ball from Screeney played in Leigh Kavanagh, and after shaking off a tackle, he drilled a low shot to the bottom of the Tipp net.

Offaly might have added more, but Tadhg Sheehan recovered well to prevent Niall Furlong getting a goal shot away, and Screeney had another effort blocked down, in what later proved to be crucial interventions.

The reset suited the Munster county, who sprung out of the traps after half-time with points from Joe Egan, and Damien Corbett (two), though a close-range free should have reduced the gap to two, and instead Tipp tried to work a goal chance and had their effort repelled.

That reprieve energised Offaly and the next three points went their way, including highlight reel points from Donal Shirley and Shane Rigney, and that looked like it might be enough.

In hurling, nothing is guaranteed however, as a finish worthy of this special occasion was just about to unfold.

Padraic Maher admits @TipperaryGAA supporters are crying out for some success at the end of a difficult season hopes the county minor team can deliver it in Sunday's Electric Ireland All-Ireland Final against @Offaly_GAA. #GAABelong

Going to be some game! @TipperaryGAA v @Offaly_GAA
Minor hurling final now available to buy online.
Buy your official match programme now and you’ll also receive a coupon to download a free digital version in time for the match. pic.twitter.com/SW9TqxFRIG