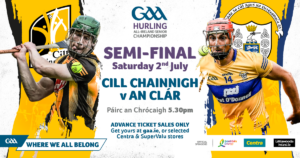 Kilkenny defeated Clare by 2-26 to 0-20 in the GAA Hurling All-Ireland Senior Championship Semi-Final on Saturday July 2nd at Croke Park.

Report by Kevin Egan at Croke Park for GAA.ie

Anything and everything was expected in this evening’s clash between Kilkenny and Clare at Croke Park, though very few supporters made the pilgrimage to Jones’ Road anticipating the largest margin of victory in an All-Ireland semi-final for a decade.

On a day when Clare’s striking in front of the posts deserted them, it was the most subtle of Kilkenny touches that made all the difference. This was a victory for clever use of the ball, only playing it exactly as far as it needed to go, and above all, getting a touch, a flick, anything, to disrupt the Clare player in possession. If the scoreboard was a touch one-sided, the hook/bock/tackle count must have been doubly so, and this proved to be as much of a factor as Clare’s 24 wides.

The word from the Marble County was that the quality of the training and in-house games over the past month, since their workmanlike victory over Galway in the Leinster final, hinted at a big performance this afternoon. Few could have imagined the whirlwind that was to come.

Perhaps the biggest question mark over Kilkenny coming into the game was their lack of consistent scoring threats up front, with TJ Reid’s metronomic freetaking and Adrian Mullen’s performances from midfield carrying the load in that regard.

Sure enough, it was a Mullen point and a free from Reid that kept the sides level in the early stages, cancelling out a sharp score from David Fitzgerald and a gorgeous piece of footwork from Shane O’Donnell that got Clare off the mark.

Already however, the wide count was mounting for the Banner. Their clear tactic of going long, both in terms of trying to hit their inside forwards from distance, and shooting from the middle third of the field, was yielding both wides and turnovers, and when Kilkenny got on a run of possession, the contrast was stark.

Eoin Cody made a real statement by winning possession past two defenders and firing the ball over from an acute angle, and by the 15th minute they had moved five clear through Reid, Cody and Browne.

The crowd of just under 40,000, the majority sporting blue and yellow, grew increasingly nervous as Tony Kelly missed the target with a couple of frees, and up front, only David Fitzgerald was making any sort of meaningful impression on the game; and even he was finding the going tough on Richie Reid.

When Diarmuid Ryan stepped up to make a fine catch and point in the 20th minute, reducing the gap to four points, 0-9 to 0-5, Clare were still in the game and just needed to settle.

By half-time, they might as well have had to scale the Cliffs of Moher, as they trailed by 14, 1-17 to 0-6. Six points in a row, scored by six different players, put paid to the idea that there is no variation of threat in the Kilkenny attack.

Many of the scores could have been traced back to Clare errors, either forced dispossessions in their own half, brought about by Kilkenny pressure, or poor deliveries into the Clare forwards that were turned over and methodically worked down the field.

A Tony Kelly free – his first score of the game – briefly stemmed the bleeding, but then yet another turnover led to a Pádraig Walsh score, Clare fluffed a goal chance with an overhit pass and again the ball was worked down the field for Adrian Mullen to split the posts, and even though it was only just before half-time, it felt final when Martin Keoghan attempted to bat the sliotar past Éibhear Quilligan and then followed up to tap the ball to the net when the Feakle man made a superb block.

11 wides, three shots dropped short and two missed goal chances summed up Clare’s first half. It got no better after the break either. Diarmuid Ryan, Rory Hayes and Kelly all pointed from distance to cut the gap slightly, but that run of scores was well-punctuated by further wides, while Kilkenny continued to threaten at the other end.

With Clare getting increasingly desperate in their bid to push forward and eat into the lead, Cian Kenny found an ocean of space to run through and slip in a second goal, and there was no way back.

Tonight, tomorrow and next week will be too early to take crumbs of solace from such meagre consolation, but Clare’s bench helped steady the ship a little bit, with Cian Nolan and Mark Rodgers particularly impressive, while Shane O’Donnell nicked three late points to reduce the gap, but the margin never fell below ten, and there was never a moment when Eoin Murphy was tested to the limit in the Kilkenny goal either.

One place in the 2022 All-Ireland hurling final has been locked down. All attention now turns to tomorrow to see if Limerick’s three-in-a-row ambitions can survive a Galway onslaught, or if we’re in for another chapter in the Kilkenny-Galway trilogy this summer.

It’s @GaaClare v @KilkennyCLG this weekend. Buy your official match programme now and you’ll also receive a coupon to download a free digital version in time for the match. pic.twitter.com/cfKNw1nUal

They meet in the championship for the first time since the 2006 All-Ireland semi-final which Kilkenny won by 8 points. Kilkenny last reached the All-Ireland final in 2019 while Clare were last there in 2013.

While Kilkenny are Leinster champions, they have lost more games than Clare, losing to Galway and Wexford in the Leinster ‘round robin’, while Clare’s only defeat came after extra-time against Limerick in the Munster final.