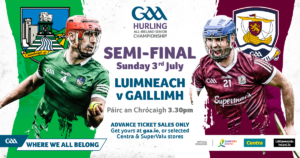 Limerick defeated Galway by 0-27 to 1-21 in the GAA Hurling All-Ireland Senior Championship Semi-Final on Sunday July 3rd at Croke Park.

A compelling contest unfolded at GAA headquarters as Limerick eventually prevailed. Just about.

Galway produced a display dripping with defiance, but Limerick had the depth to locate the answers.

That was what divided the teams at the end of an absorbing battle. Following a Munster final for the ages, Limerick had to demonstrate grit again.

At the end John Kiely punched the air in delight, fully aware that this was added to a growing list of satisfying triumphs.

Early on the evidence suggested Galway would be in for a demanding afternoon. Trailing 0-6 to 0-1 by the eight minute Galway had squandered a string of opportunities.

It was a theme of the first half, but so to was the gutsy manner in which Galway were competing.

The Tribesmen, though, prompted by Tom Monaghan and Ronan Glennon’s industry and David Burke’s guile, gradually came into the reckoning.

Padraic Mannion and Joseph Cooney were wholehearted too as Galway started to reduce the deficit.

Gillane and Kyle Hayes were causing plenty of bother as Limerick edged 0-13 to 0-9 clear in the 29th minute.

Conor Cooney subsequently converted a free with Cathal Mannion adding two from play as Galway trimmed the gap to the minimum.

Limerick finished the opening period strongly with Gillane drilling two scores either side of a Declan Hannon effort.

It meant the green and white side led by 0-16 to 0-12 at the turnaround. In the first 35 minutes Limerick’s efficiency levels were crucial, registering 0-16 from 20 shots, while Galway only scored 0-12 from 27.

When the action recommenced Cathal Mannion rifled over a point before Brian Concannon plundered a 37th minute goal.

David Burke’s pass was gathered by Concannon, who made the Limerick net dance. Joseph Cooney whipped over a gorgeous point and suddenly Galway were 1-14 to 0-16 in front.

Limerick were under duress, but they didn’t panic. Diarmaid Byrnes was mining frees from distance as the game continued to ebb and flow.

A Tom Monaghan point steered Galway 1-19 to 0-21 ahead with nine minutes left. Cian Lynch was introduced, while his Patrickswell colleague Gillane levelled.

An All Ireland decider against Kilkenny is next on the agenda for Limerick. Another challenge that will be embraced.

Limerick are in the semi-final for a fifth successive year; Galway were last there two years ago, when they lost to Limerick.