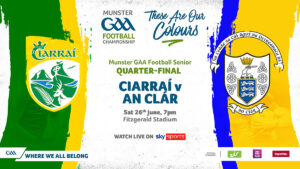 Kerry defeated Clare by 3-22 to 1-11 in the Munster Senior Football Championship Quarter-Final on Saturday June 26th at Fitzgerald Stadium Killarney.

Report By Paul Brennan at Fitzgerald Stadium, Killarney for GAA.ie

Kerry’s provincial and All-Ireland ambitions are up and running and very much alive after they accounted for Clare in unfussy fashion with a 17-point win over a gutsy team that simply couldn’t match the breadth and depth of Kerry’s class in this Munster quarter-final.

Kerry had scored 13 goals in four games in the recent League campaign and they added another three here, Sean O’Shea, David Clifford and Micheal Burns raising the green flags raised in Fitzgerald Stadium.

Kerry boss Peter Keane had cited that Munster semi-final loss to Cork last November as reason enough for no one in the Kingdom to be getting carried away with anything other than getting out the Killarney gap with a win of any sort.

Kerry kept faith with Kieran Fitzgibbon in goal and Mike Breen in the half back line, and both players performed very well on their championship debuts.

This was Clare’s fifth Munster Championship meeting with Kerry in six years and all ended in defeats ranging from six points to 22. This 17-point loss was up there with the worst of them, though not entirely reflective of Clare’s efforts over the 70 minutes.

The portents were bad for Clare when O’Shea kicked Kerry into the lead after 14 seconds. By the seventh minute O’Shea had four points to his name, and Kerry led 0-5 to no score before Emmet McMahon – only seconds on the field as a replacement for the injured Cathal O’Connor – raised Clare’s first flag.

Kerry were 0-8 to 0-2 to the good through David Clifford (2) and Paul Geaney when Clare centre-forward Eoin Cleary scored two excellent points as Clare remained compact and patient.

Kerry were just five ahead with Clare looking like they might make it to the interval very much in contact, but in the 34th minute Paudie Clifford pounced on a mistake to send O’Shea through on goal and the Kenmare man rolled the ball past Stephen Ryan to make it 1-9 to 0-4.

The irony was that the Clare mistake came from a Kerry man, Conor Jordan, the Austin Stacks club man in Tralee, playing inter-county football for his father’s native county.

At half time Kerry led 1-11 to 0-5, perhaps a slightly flattering margin, though they were largely the dominant team and had controlled the tempo for much of the half.

By the second water break the gap was still eight points, 1-13 to 0-8, as Kerry began to use their bench to keep the momentum going.

Tubridy nicked a Clare goal in the 63rd minute to make it 1-18 to 1-9 but three minutes later David Clifford smashed home from Adrian Spillane’s pass, and deep into additional time substitute Micheal Burns made it a hat trick of Kerry goals to complete the expected comfortable home win.

Next up for Kerry is a semi-final against provincial champions Tipperary in Thurles in a fortnight. Keane and co will find it hard to play down the expectations of another big Kerry win.

Congratulations to Sean O'Shea on the receiving Man of the Match Award!👏👏💚💛 pic.twitter.com/GzIaohW2AQ

🟢🟡@Kerry_Official manager Peter Keane gives his thoughts after the Kingdom kicked off their championship campaign in style! pic.twitter.com/B7IhCLJ46b

🗣️"If you make mistakes against the top teams, you get punished severely!"@GaaClare manager Colm Collins reacts to the Banner's defeat… pic.twitter.com/5VPX2fNx1y

🏐The Football Championship gets underway, live on Sky Sports!

LIVE – The first of our new weekly shows ‘The Waterbreak’ – Covering all aspects of Kerry GAA. We look ahead to big games for the Footballers, Hurlers, @kerryladiesfoot & @Kerry_Camogie. John Lenihan @fitzgeraldstad & much more. #GAA #LGFA #Camogie https://t.co/wXWSrSx3HW 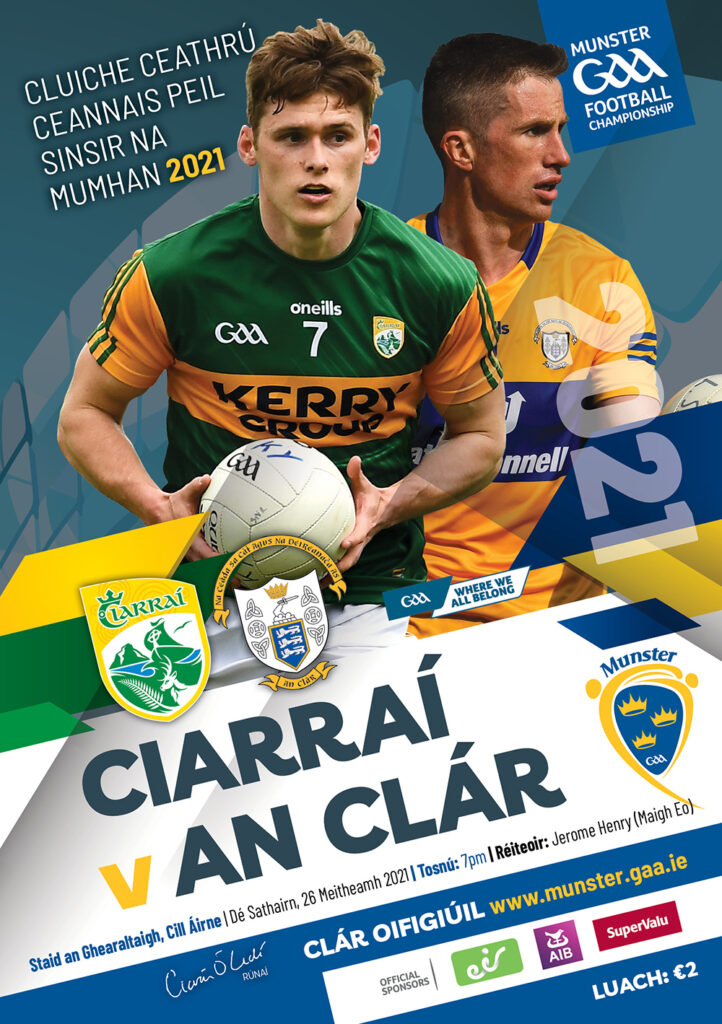 For those attending Saturday’s game, a match programme will be on sale in Fitzgerald Stadium Killarney for 2 euro.