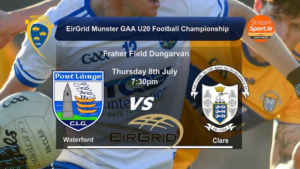 Waterford defeated Clare by 4-5 to 1-9 in the EirGrid Munster Under 20 Football Championship Quarter-Final on Thursday July 8th at Fraher Field Dungarvan.

Great win for @WaterfordGAA U20 Footballers tonight v @GaaClare in a match streamed live by @MunsterGAA. Check out their four goals below pic.twitter.com/IkEfBUfVfJ

Tom O’Connell was the hat trick hero in Dungarvan last night as Waterford advanced to the semi finals of the Munster Under 20 football championship in style.

“Brilliant for myself and my family,” the 18-year-old man of the match said afterwards. “I pride myself on being a big football man and I’m happy to be part of a team winning in Waterford.”

The Brickey Rangers full forward struck 3-1 before substitute Henry Griffin fisted in a fourth goal in the last minute of normal time to seal victory. It sets up a last-four clash with Tipperary at Semple Stadium next Thursday.

Clare won this fixture by 17 points last year but Gavin Whelan’s men turned the tables in front of 200 vocal supporters.

Banner senior Emmet McMahon curled over the opening point after 90 seconds before Cillian McGroary added a second. Cillian Rouine then dragged a goal chance left and wide. Ryan Barry made it three nil to the visitors after eleven minutes.

Padraig Fitzgerald raised Waterford’s first white flag in the 12th minute. Off the next kickout, Liam Fennell found O’Connell and the Waterford full forward coolly rounded the keeper Oisin O’Loughlin and found the bottom corner. O’Connell banged in a second four minutes later after he fetched a DJ Kiely delivery. 2-2 to 0-3 to the home side at the first water break.

Clare cut the gap to one by the interval. Mark McInerney pointed twice before McMahon kicked a free and sub Brian McNamara fisted over in injury time.

McInerney levelled the contest two minutes into the second period. On 36 minutes, McMahon was brought down for a penalty and McInerney buried the spot kick in the bottom corner (1-8 to 2-2).

Niall McSweeney slotted a free at the other end, Waterford’s first point in 21 minutes. O’Connell completed his hat trick on 42 minutes after a Clare short kickout went awry.

Oisin O’Loughlin denied O’Connell his fourth goal at the start of the final quarter. Centre back Colin Foley snuck the home side in front on 53 minutes.

Sub Henry Griffin fisted in a fourth goal in the last minute of normal time after he was set up by Seamus Fitzgerald. In an action packed finish, Aaron Ryan saw his injury time penalty saved by O’Loughlin. Ryan was then dismissed for a second bookable offence.

It didn’t matter as the Deise celebrated a rare underage victory. A shot in the arm for Waterford football.

As the capacity of Fraher Field Dungarvan is less than 5,000, only 200 spectators will be allowed to attend Thursday’s Clare versus Waterford Under 20 Football match. Tickets will be allocated only to the participating counties.

Best of luck to Gavin Whelan, his management team and all of the panel!#deiseabú ⚪️🔵 pic.twitter.com/wjQb1zy3IP