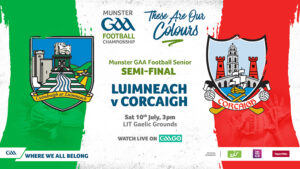 Cork defeated Limerick by 1-16 to 0-11 in the Munster Senior Football Championship Semi-Final on Saturday July 10th at the LIT Gaelic Grounds.

Report By Daragh Small for GAA.ie

John O’Rourke scored 1-3 as Cork advanced to their fifth successive Munster SFC decider after victory over a brave Limerick side at the LIT Gaelic Grounds.

The home side competed well throughout the opening half but they fell away at the end and finished on the wrong side of a 1-6 to 0-4 half-time scoreline.

O’Rourke’s goal was the most significant score of the game and a brilliant finish to the half that really put daylight between the two sides.

Limerick needed to find the net in the second half but couldn’t. Cork held them to points from distance, however, they were made to fight hard to reach another provincial final. Limerick finished poorly again in the final quarter.

Cork captain Ian Maguire won the toss and they played with a slight breeze at their backs in the first half, but it was Limerick who registered the first point inside the opening minute through Gordon Brown.

Cork hit back emphatically and it was a move started by their full-back Daniel O’Mahony. The ball was worked upfield and Ruairi Deane found a chink in the Limerick defence. He passed to O’Rourke and the Carbery Rangers clubman finished past Donal Ó Sullivan at the second attempt. The Limerick goalkeeper left the field injured after the collision between the two.

There was a lengthy stoppage and when play resumed Hugh Bourke and Brian Hurley traded impressive frees. But Limerick in particular looked confident and they continued to threaten up front.

Although Robbie Burke missed with his attempt from a free, Bourke made amends. Maguire hit back and his team were 1-2 to 0-3 in front at the first water break.

Nevertheless there were some poor misses and Luke Connolly’s poor attempt with a free from near the right sideline only added fuel to Limerick’s fire.

Neville sent a poor shot wide up the other end but it was the hosts who scored next when Bourke ended a 15-minute wait for a Limerick point.

Cork replied straight away through Hurley and then Sean Powter advanced from his corner-back role to send Cork into a three-point lead for the first time.

There were five minutes added at the end of the first half and Powter landed another sucker-punch with a second point, Mattie Taylor scored too.

Cork were five points clear at the break. O’Rourke and Hurley scored either side of a Neville effort on the resumption.

Points from Bourke (free) and O’Sullivan (45) kept Limerick right in contention but two quickfire scores courtesy of Hurley and O’Rourke were momentum breakers.

Neville should have buried his shot when he got through on goal in the 48th minute but he sent that wide. He made up for that miss by doubling up on his personal tally.

Bourke and Cork substitute Cian Kiely scored before the final break with the Rebels taking a 1-11 to 0-9 lead into it.

Ian Corbett reduced the arrears even further but O’Rourke put Cork clear again before he left the field. Kiely, Hurley and Sean Meehan added a few more and the result was beyond doubt.

The Limerick team to play Cork in the Munster Senior Football Championship Semi-Final is selected https://t.co/0L2bG7WeTu 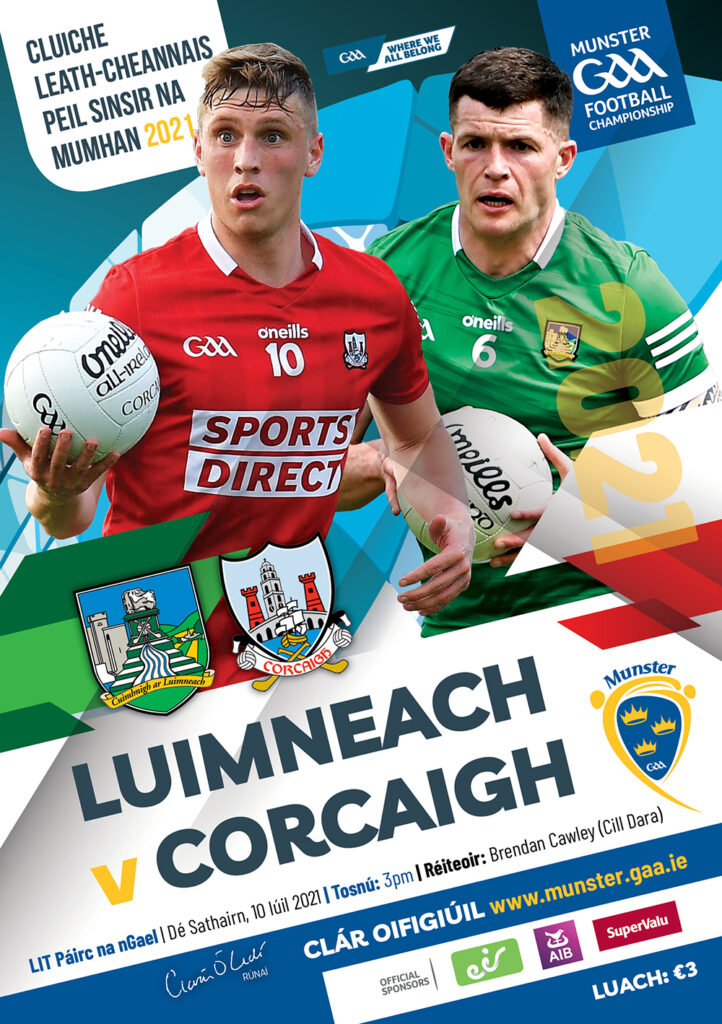 For those attending Saurday’s game, a match programme will be on sale in the LIT Gaelic Grounds for 3 euro.