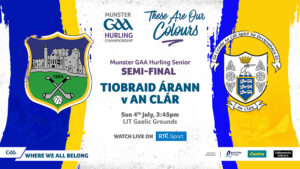 Tipperary defeated Clare by 3-23 to 2-22 in the Munster Senior Hurling Championship Semi-Final on Sunday July 4th at the LIT Gaelic Grounds.

Report By Shane Brophy for GAA.ie

Tipperary progressed to a Munster Senior Hurling Final against Limerick after a semi-final victory over Clare at the LIT Gaelic Grounds.

Tipperary trailed by a point at half time, but the game turned when Jason Forde converted a penalty immediately after the restart.

When Aidan McCarthy, who was sin binned for the foul on Jake Morris, returned to the fray, Tipp had outscored Clare 2-4 to 0-2 with Seamus Callanan adding the other on 45 minutes.

The game began at a frantic pace with the sides sharing the first six points inside four minutes before Dan McCormack scored his second from play in the early going to nudge Tipp in front.

However, they were rocked back on their heels two minutes later when Ian Galvin took advantage of a Padraic Maher slip to fire past debutant Tipp keeper Barry Hogan.

The Banner took over and struck the next four points without replay from Colm and Ian Galvin, David Reidy, and a Tony Kelly free.

A sublime Jason Forde sideline-cut got Tipp going once more as he added a free before Michael Breen superbly hockey controlled and then pulled first time to the net on fifteen minutes. A Jake Morris point brought the sides level at 1-7 apiece at the first water-break.

Ryan Taylor was superb for Clare in the opening half, and he nudged them back in front before Forde and then a John O’Dwyer point put Tipp back in front. Tony Kelly was kept on the periphery but kept the scoreboard ticking over with a free, but Jason Forde added two in quick succession for a two-point lead.

Tipp had goal chances in the first half with both Jake Morris and Seamus Callanan denied superbly by Eibhear Quilligan, the latter resulting in a Tipp 65 which Forde converted.

However, Clare at the final say in the half as Aron Shanagher’s shot at goal was mis-hit but landed in space where David Reidy got to it just ahead of Cathal Barrett, flicking into Tony Kelly who fired past Barry Hogan for a 2-11 to 1-13 half time lead.

Kelly stretched the lead with an early second half free before Forde’s goal changed the complexion of the game. Seamus Callanan and Ronan Maher landed points either side of a Tony Kelly free, but Callanan found the net on 45 minutes, his miss-hit shot snuck in at the near post past Quilligan.

With Clare shellshocked, Tipp kicked on with O’Dwyer (2) and Morris on target as the Premier led by seven at the second water-break and it should have been more but for missed chances, with Quilligan making up for his error with a final save from Jason Forde.

Subs Willie Connors and Alan Flynn contributed three points between them as Tipp opened a ten-point lead at one stage, but Clare played to the very end with Tony Kelly (4 frees), John Conlon, Cathal Malone (2) and Rory Hayes on target, while Barry Hogan had to make a fine save to deny Mark Rodgers which could have set-up a grandstand finish.

Dan McCormack Man of the Match

Dan McCormack said watching Wexford v Kilkenny was a reminder that championship action meant it was going to a hard-hitting encounter with Clare.

He was pleased by how they handled the Clare challenge. #rtegaa pic.twitter.com/qHUP3SNEcR

All supporters attending one of this weekend’s Munster Senior Hurling Semi-Finals are asked to wear a face covering at all times during their time in Semple Stadium or the LIT Gaelic Grounds.

Thank you for your cooperation. pic.twitter.com/ee0HYn35cb

Best wishes to manager @LiamLsheedy and the boys! 💪 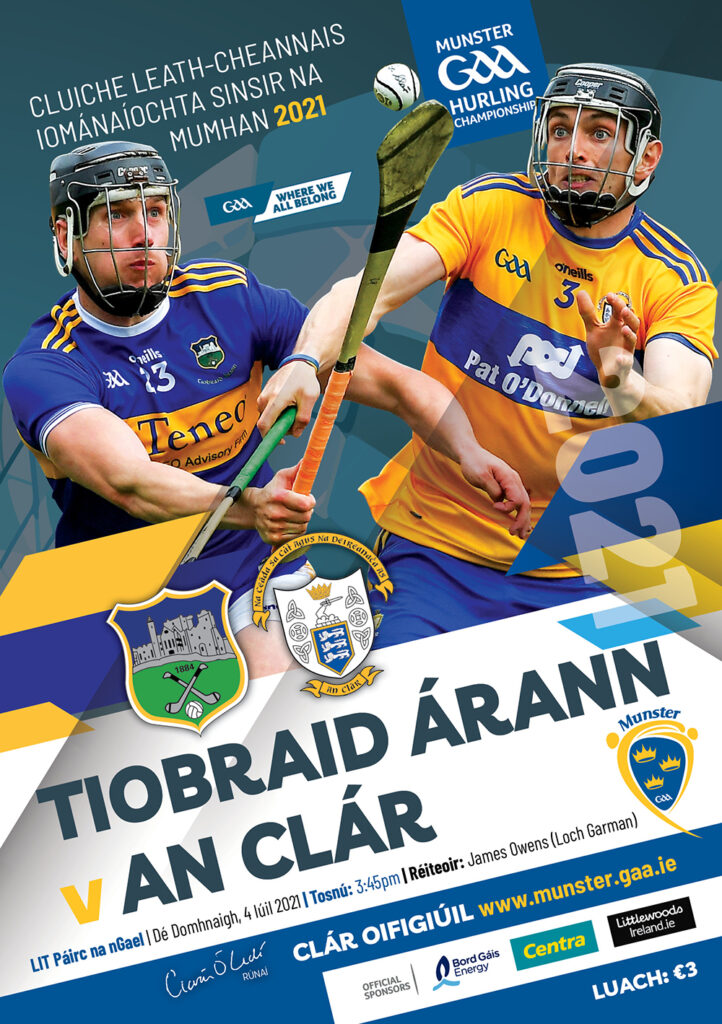 For those attending Sunday’s game, the match programme will be on sale in the LIT Gaelic Grounds for 3 euro.