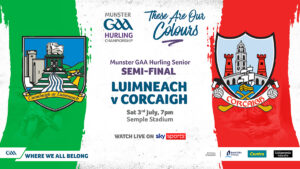 Limerick defeated Cork by 2-22 to 1-17 in the Munster Senior Hurling Championship Semi-Final on Saturday July 3rd at Semple Stadium Thurles.

REPORT: Two goals in first-half injury time were crucial as @LimerickCLG got their championship campaign off to a winning start in this evening’s Munster SHC semi-final against @OfficialCorkGAA at Semple Stadium. #GAA #GAABelong

Two goals in first-half injury time were crucial as All-Ireland champions Limerick got their championship campaign off to a winning start in Saturday evening’s Munster SHC semi-final against Cork at Semple Stadium.

As the opening period reached the regulation 35 minutes, the sides were level, Cork with 1-7 to the 0-10 of Limerick, who were back to the full complement after the return of Peter Casey following a sin-binning.

In the three minutes from there to the whistle, Limerick struck two devastating blows. First, the excellent Cian Lynch found the unmarked Darragh O’Donovan, whose goalward shot took a deflection off Seán O’Donoghue and in. In the wake of that, Aaron Gillane’s pass gave roaming wing-back Kyle Hayes a sight of goal and his low shot past Patrick Collins ensured a six-point half-time advantage.

From there, Limerick were able to enjoy a cushion of at least four points throughout the second half, but they will also be thankful to goalkeeper Nickie Quaid for a vital penalty save from Patrick Horgan in the 25th minute, when a second Cork goal would have put them five clear.

Cork must negotiate the qualifiers and, while they can take some positives, equally they will rue such a missed opportunity. Having fallen 0-4 to 0-2 behind in the early stages as Limerick began well, the Rebels hit the front for the first time when Shane Kingston did well to seize a breaking ball and fire a shot to the Limerick net.

A fine Jack O’Connor point just after that left them 1-3 to 0-4 in front at the water-break and, while Limerick had points from Séamus Flanagan and Aaron Gillane after action resumed, Cork replied each time through Séamus Harnedy and Patrick Horgan. It looked as if the Rebels would establish a three-point lead when Conor Cahalane was fouled by Casey as he drove towards goal, but the decision of referee Paud O’Dwyer was a penalty and sin-bin. Horgan stepped up with the chance to make it a five-point game but Quaid denied him and Limerick made the most of the let-off despite being 14 against 15.

Just when it looked as if the sides would retire level, the Shannonsiders struck definitively. When Lynch found midfielder O’Donovan in space, he went for goal and was rewarded with a fortuitous deflection off Seán O’Donoghue; then, with their tails up and Cork reeling, Gillane’s pass gave wing-back Hayes an avenue towards goal and he fired past debutant Patrick Collins.

In the first five minutes of the second half, Limerick moved eight clear after superb points from Diarmaid Byrnes and Casey, but Cork refused to wilt and were back to within five after Kingston, Robbie O’Flynn and Horgan all scored in quick succession. However, having scored 18 goals in the league, Cork found it difficult to break down the Limerick defence – the closest they came in the third quarter was an O’Flynn ball to Horgan, well cut out by Seán Finn – and there were still six points separating the sides, 2-16 to 1-13, at the water-break.

Cork had some hope when Darragh Fitzgibbon and Shane Barrett had them within four on the restart, but subsequent chances to eat further into the lead were not taken. Limerick did enough to hold them off and sub Graeme Mulcahy made it 2-18 to 1-6 on 67. While Fitzgibbon replied with his third, Limerick made the game safe with points from the irrepressible Lynch, Byrnes, Casey and sub David Reidy.

🗣️"We have a lot of trust in our own ability as a team…"@LimerickCLG manager John Kiely reacts to the Treaty's victory! pic.twitter.com/oMAGxnF8Bl

All supporters attending one of this weekend’s Munster Senior Hurling Semi-Finals are asked to wear a face covering at all times during their time in Semple Stadium or the LIT Gaelic Grounds.

Thank you for your cooperation. pic.twitter.com/ee0HYn35cb

With a very limited capacity for this game, tickets are being allocated to the two participating counties to distribute via their members. There will be no public or online sales for this fixture.

Cork Senior Hurling Team to play Limerick on Saturday in the Munster Championship has been announced https://t.co/VDndg4deM2 pic.twitter.com/cNsUiwLVes

🗣️"As important as Patrick Horgan is up front, Mark Coleman is as important defensively…"

🔴⚪️ @AnthonyNash6 examines the changes Cork have made this season!

📺Watch Inside The Game at 10pm on Sky Sports Arena! pic.twitter.com/J3tJbPopPP 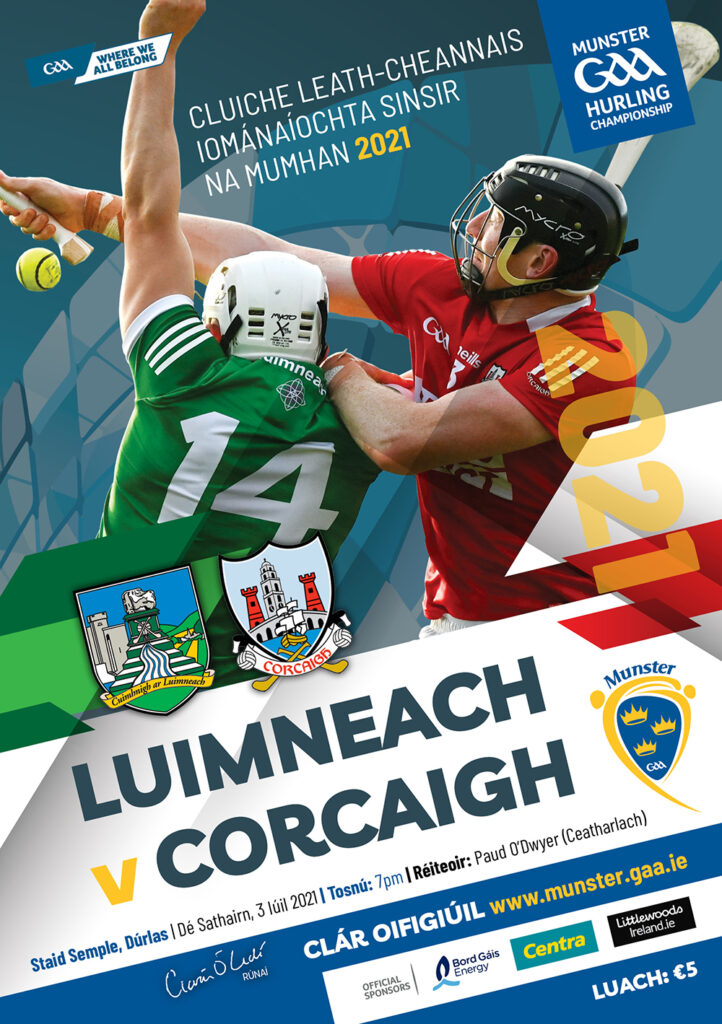 For those attending Saturday’s game, the 48 page match programme will be on sale in Semple Stadium for 5 euro.