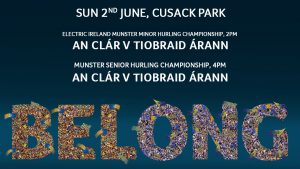 Tipperary defeated Clare by 3-21 to 0-17 in the 2019 Munster Senior Hurling Championship on Sunday June 2nd at Cusack Park, Ennis.

Report By Cian O’Connell at Cusack Park for GAA.ie

Statements continue to be made by Tipperary, who stormed into Ennis claiming a third Munster Championship triumph of the campaign. Following the despair of 2018 this is sharply turning into a summer of sweet satisfaction for the blue and gold team.

Away successes over Cork and Clare sandwiched either side of a convincing home win over Waterford means serious momentum is being generated by Tipperary. The opening period illustrated Tipperary’s cocktail of graft and craft as Liam Sheedy’s outfit thundered into a 1-14 to 0-11 interval lead.

There was so much to admire in how Tipperary delivered initially with Brendan Maher restricting Tony Kelly’s influence, Noel McGrath supplying gorgeous touches at centrefield, and inside the forward line carried a potent threat.

Before the break John McGrath had four points mined from play, while Seamus Callanan dashed about craving involvement. For all the class on show it was Tipperary’s willingness to work which proved hugely significant as Patrick Maher occupied a central role.

Indeed it was a cute flick from Callanan which commenced the 21st minute move ultimately enabling Noel McGrath to bundle a goal.

BACK OF THE NET by Tipperary's Noel McGrath! pic.twitter.com/5aTHJ14qVT

That major edged Liam Sheedy’s charges 1-7 to 0-6 ahead injecting them with confidence as the points flowed from a variety of distances and angles.

The McGraths were splendid with a 32nd minute effort from Noel stroking Tipperary 1-13 to 0-8 clear, but Clare kept battling. Three of the next four scores arrived courtesy of Peter Duggan frees ensuring six points divided the teams at the turnaround.

Kelly wriggled away from Maher to pinch a point, but Tipperary responded by hitting 2-2 on the spin in 10 minutes. Callanan reacted swiftly to gather the sliotar in the 40th minute after a Jason Forde free had rebounded off the post.

Forde added a couple of frees and then the relentless Patrick Maher burst through to make the Clare net dance in the 50th minute. Suddenly Tipp were 3-16 to 0-12 in front and the margin of victory was the only issue needing to be sorted.

Patrick Maher with a third GOAL for Tipperary! pic.twitter.com/S5g7UIuUYn

These are encouraging times for Tipperary.

John McGrath – Man of the Match

John McGrath spoke to @ValerieWheeler_ about Tipperary's win over Clare.

"We're just a really competitive group. A lot of the new young guys coming in are really pushing it" pic.twitter.com/1MwivBx2Jf

Terrace: Pre Purchase: €15.00 Match Day €20.00
Juveniles €5 each
Senior Citizens/Students (Stand & Terrace)
Purchase full price tickets and on the day of the match they can claim a rebate of €5 when they produce appropriate I.D Prior to entry into the Stadium.

A limited number of Terrace Tickets in Cusack Park Ennis for the Clare v Tipperary SHC match on this Sunday June 2nd are available to buy online at Tickets.ie and participating Centra & Supervalu’s while stocks last.

The @ClareSenHurlers team to play @TipperaryGAA in the 2019 @MunsterGAA Munster Senior Hurling Championship in Cusack Park, Ennis, at 4.00pm on Sunday, 2 June 2019.

The Tipperary team to play Clare in their Munster Senior Hurling Championship Round 3 fixture on Sunday next, 2nd June at 4pm in Cusack Park, Ennis, has been announced by manager Liam Sheedy. pic.twitter.com/yuZK57mDw8

Parking for @ClareSenHurlers and @TipperaryGAA supporters is being provided at Áras Contae an Chláir, New Road, Ennis, from 10.00am to 8.00pm this Sunday.@MunsterGAA pic.twitter.com/RcOxcpeC6I