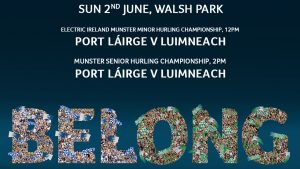 Limerick defeated Waterford by 2-24 to 0-10 in the 2019 Munster Senior Hurling Championship on Sunday June 2nd at Walsh Park, Waterford.

Limerick got their Munster Hurling Championship campaign back on course following a comfortable victory over a disappointing Waterford side which has now gone eight games without a Championship win.

At the break, despite playing into a deceptively strong wind, Limerick led by 1-10 to 0-7 and were good value for that advantage. Thereafter, the All-Ireland champions never looked back.

In front of a 10,784 crowd, the hosts took the lead after only 33 seconds through Stephen Bennett, with Pauric Mahony converting a free from the halfway line just shy of the second minute.

Mahony, following a let-off at the other end for out of position goalkeeper Stephen O’Keeffe, impressively found his range to send the hosts three clear by the sixth minute.

A minute later, buoyed on by their sizeable travelling support, Aaron Gillane converted Limerick’s first point from a free after Gearoid Hegarty was impeded following a superb retrieve. Waterford instantly replied via Jack Prendergast, who benefited from a smart Austin Gleeson point to score from 35 metres only for Gillane to turn over his second free from Limerick’s next attack.

Kyle Hayes was next on the scoresheet for the MacCarthy Cup holders following a sweeping upfield move instigated by full-back Mike Casey, the confidence in green ranks visibly growing with every passing minute. Pauric Mahony’s 15th minute free restored the Deise’s two-point advantage, but between then and the break, John Kiely’s men seized the initiative, outscoring their hosts by 1-8 to 0-2 thereafter.

The champions’ next score was the half’s only goal, coming after 16 minutes. Gearoid Hegarty’s penetrative run drew four Waterford men out of position and he shipped a heavy challenge before Aaron Gillane slid the ball into the Keane’s Road net.

Gillane immediately replied with a free of his own within a minute before wing-back and debutant Paddy O’Loughlin galloped forward to point brilliantly after 23 minutes. Declan Hannon, from distance in the 28th minute, followed by Peter Casey in the 32nd, left Limerick six points clear and in complete command. Pauric Mahony mustered a stoppage time point for Waterford before O’Loughlin, under no pressure when latching onto Aaron Gillane’s crossfield pass, tagged on his second point.

Seconds before half-time whistle, Stephen Bennett failed to batt a sidelined ball into the Limerick net from point blank range when it appeared easier to find the target.

A subsequent Pauric Mahony free sailed wide, indicative of Waterford’s below-par campaign, and they trudged off the field six points down for the third successive outing.

After the interval, Limerick claimed the points without breaking a sweat while Waterford looked utterly removed from the side which reached an All-Ireland Final just two summers previously.

Shane Bennett opened the second half scoring for Waterford, with Kyle Hayes mustering an immediate reply for the All-Ireland champions. In the 38th minute, an unimpeded Gearoid Hegarty charged down the left flank to slam the ball beneath Stephen O’Keeffe for Limerick’s second and decisive goal.

John Kiely rung the changes and must have been thrilled by the scoring contributions of his substitutes, chief among them Shane Dowling, who tallied five points during his 19-minute cameo.

Just shy of the hour mark, Waterford’s miserable afternoon was compounded by the straight red card shown to Pauric Mahony. They’ll travel to Páirc Uí Chaoimh on Saturday next with nothing other than pride to play for.

The Shannonsiders are back in business, and come equipped with a bench that could once again prove instrumental if they’re to successfully defend their All-Ireland title.

A limited number of Terrace Tickets in Walsh Park, Waterford for the Waterford V Limerick game this Sunday, June 2nd are available to buy right now at tickets.ie and participating Supervalu and Centra stores.

The Waterford Senior Hurling Team to face @LimerickCLG on Sunday in Walsh Park was named following training tonight in Walsh Park! Best of luck to Paraic and all his team! #Support #DeiseAbú pic.twitter.com/zbFndrT5pN

Match Day information for Parking, Tickets and all you need to know about coming to Walsh Park next Sunday! https://t.co/xoTmQjPhPv pic.twitter.com/PDU7XjU3oc

Video – Waterford Hurler, Noel Connors tells us about his #HomeComforts in Walsh Park, ahead of the weekend!