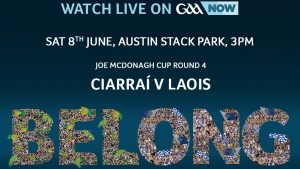 In the Joe McDonagh Cup; GAANOW was at Austin Stack Park as @CLGLaois booked their place in the decider as they defeated @Kerry_Official! pic.twitter.com/MyJDVm4eWZ

REPORT: CLG @CLGLaois secured their place in the Joe McDonagh Cup Final thanks to a convincing win over @Kerry_Official today.

The Laois hurlers are headed for the Joe McDonagh Cup final and Kerry for a relegation play-off with Offaly after the Leinster men enjoyed a deserved eight-point win in Tralee this afternoon with five goals doing the damage for Eddie Brennan’s team.

With so much still at stake coming into today’s Round 3 games, Laois knew after Antrim lost to Westmeath earlier in the day, that a win for themselves in Tralee would be good enough to secure them a place in the McDonagh Cup final, and a possible All-Ireland preliminary quarter-final fixture against the third-placed team from Leinster or Munster.

Wind-assisted in the first half, Laois set to work early, and despite Kerry scoring the first two points Laois out-hurled them for the majority of the game and took advantage of some sloppy touches and uncharacteristic hesitancy in the Kerry team.

Aaron Dunphy’s seventh minute goal made it 1-2 to 0-3 for the visitors and they never trailed in the game after that. Within a minute of Dunphy’s strike Ross King broke through for another confidence finish to make it 2-2 to 0-3, and when two Stephen Maher frees and King from play made it 2-5 to 0-3 by the 12th minute it looked grim for the Kerry supporters in the the 800 attendance.

Padraig Boyle’s great goal in the 13th minute gave Kerry hope and they settled much better for the second quarter and hurled their way back into the game with Boyle, Shane Conway and Michael O’Leary mining some crucial scores to keep the Kingdom in the hunt.

By the 25th minute Kerry were back to within three points of Laois but Paddy Purcell played in Neil Foyle who slipped the sliotar to the net off the goalkeeper’s hurley as Laois took that six-point cushion to the break.

As they did in the first half, Kerry scored the first two points of the second to get within four but their defensive frailties betrayed them again when Laois midfielder Charles Dwyer crashed a fourth goal past John Brendan O’Halloran to make it 4-12 to 1-13 after 40 minutes.

Shane Conway converted two 65s but Laois iced the win in the 46th minute when Purcell smacked in a fifth goal for the Leinster men, and it was fairly academic thereafter with the sides just about splitting the last 11 points between them.

Laois host Westmeath next weekend in what looks like a dress rehearsal for the McDonagh Cup final a fortnight after that, while Kerry must sift the embers of this loss to find enough to regroup against Offaly in Tralee next Saturday with the loser heading down to the Christy Ring Cup for next year.

This game will be streamed live on GAANow at https://www.gaa.ie/gaa-now/

Round 4 of the Joe McDonagh is here! Whether home or abroad, tune in LIVE on #GAANOW to see @Kerry_Official v @CLGLaois tomorrow. Coverage begins from 2:55pm on https://t.co/UxNPCp4fWF pic.twitter.com/Se0iROs0Ht