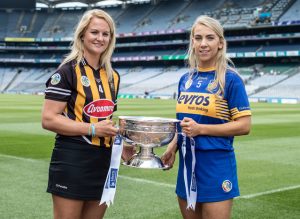 Kilkenny defeated Tipperary by 2-21 to 3-12 in the Liberty Insurance All-Ireland Senior Camogie Championship Semi-Final on Saturday August 17th at the LIT Gaelic Grounds.

Kilkenny came good in the second half to return to the Liberty Insurance All-Ireland Senior Camogie Championship Final for the sixth time in the last seven seasons.

Michelle Quilty was the star of the show with a goal and nine points but the Noresiders took some time to deal with the Tipperary challenge and it was only in the last quarter that they put significant distance between themselves and their opponents. Even at that, they conceded two late goals and exhibited enough sloppiness to displease them.

It was a fantastic effort by Tipperary for a long way though and they got the perfect start, playing with an assurance and showing courage in not adopting a sweeper against the free-scoring Cats, a decision influenced in some part no doubt by having the wind in their favour.

They caused quite a bit of discomfort in the Kilkenny defence right throughout the opening period and registered the opening two points as they went toe-to-toe with the heavily-fancied Cats. Megan Ryan got it going with a wonderful point from distance and Eibhlís McDonald slotted neatly soon after, following a well-crafted move.

Kilkenny were soon level thanks to a brace of scores from their former All-Ireland winning skipper Quilty, but Tipp made their intent plain as Ereena Fryday restored their lead. Things got even better in the eighth minute, when Orla O’Dwyer was adjudged to have been fouled and Aoife McGrath’s free from outside the 65 appeared to fly all the way to the net, much to the disappointment of Kilkenny netminder Emma Kavanagh.

Any team Ann Downey is involved in is unlikely to shirk a battle however, and her charges bagged the next four scores to move in front. Miriam Walsh wasn’t among those raising the flags but she was Kilkenny’s most influential figure in that opening period, winning most of her tussles with Julieanne Bourke and involved as Quilty (free), Katie Power and Anne Dalton pointed.

The powerful Tullaroan forward then won possession 40m out when she had no right to do so, and set off a chain of that involved Denise Gaule and Power, and ended with Quilty rounding Caoimhe Bourke before hand-passing to the net in the 21st minute.

It was Kilkenny that finished strongest though, and they had drawn a point up when Anne Dalton grabbed her sixth goal of the campaign, sumptuously scooping the sliotar over a diving Caoimhe Bourke, after the Tipperary goalie had made a stupendous full-length save from Quilty. That made it 2-9 to 1-8 at the change of ends.

It was always going to be more difficult into the wind in the second half and though Devane kept the Premier in touch from placed balls, Quilty did the same at the other end.

Orla O’Dwyer goaled for Tipperary in the 59th minute and Karen Kennedy struck with the last puck of the ball but Kilkenny had more than enough done by then.

This is one of the deadliest rivalries in Gaelic Games, and it is fantastic to see it played out on one of the biggest stage of the Camogie calendar once more.

Kilkenny have, of course, been regulars at this level, and are serial Semi-Final victors, pursuing a fourth consecutive Final appearance and a sixth in seven seasons.

On the other hand, Tipperary haven’t dined at the top table for since 2006 when among the panel was Mary Ryan, who has had a stellar season so far. They haven’t won the O’Duffy Cup since the previous year, when their skipper was the unrelated Joanne Ryan, back in the fold on the Intermediate squad that claimed Division 2 League honours this year and has also reached the penultimate hurdle of their Championship.

The Intermediates are returning to the last four and so too are the Seniors, which is indicative of the progression that has been made and a pleasing consistency of performance. This has been done while introducing some of the All-Ireland Minor runners-up of 2015, the champions of 2016 and a handful of the current talented squad too.

This campaign has had its well-publicised tribulations, not least the loss of manager Bill Mullaney for health reasons, but the remaining mentors took up the cudgel, with Niamh Lillis the public face of what she emphasises is a group effort.

The Premiers came through the group stages with four consecutive wins to finish second, overcoming losses during games of key individuals such as Orla O’Dwyer and Karen Kennedy, in a couple of those ties to advance.

They then withstood an early Limerick onslaught to grind out a win in the Semi-Final. O’Dwyer was magnificent at Semple Stadium that evening, with Kennedy, Niamh Treacy and Mary Ryan, filling in at full-back due to the injury of Gemma Grace, having already played centre-back and midfield this season, others to shine. Cáit Devane worked selflessly as usual and on a difficult evening for freetakers, was unerring from placed balls. Megan Ryan has been a real goal threat throughout the campaign running from deep positions while the younger element is represented by the likes of Grace O’Toole. Nicole Walsh has recovered from concussion to be a major option from the bench and Clodagh Quirke is an excellent team captain.

Kilkenny have taken off the shackles this year, having deployed Anne Dalton as sweeper in recent seasons and withdrawn numbers to clog up the middle third in preparation largely for the Cork challenge. The 2016 champions only lost the last two deciders to the Rebels by the minimum margin on each occasion but it appears that Ann Downey has decided to go for the jugular this time around.

While the Stripeywomen have always had heavy scorers, they have ramped it up this term with five individuals recording 3-10 or more in just four games: Dalton, Denise Gaule, Katie Power, Michelle Quilty and Miriam Walsh.

The repositioning of Dalton has clearly been the most notable aspect of this shift in emphasis. It should be remembered that the St. Lachtain’s legend earned three All-Stars at centre-back and is the reigning Player of the year, but she was player of the year a decade ago as a midfielder, from where she earned her other three All-Stars gongs. Most of this season has seen her operating across the half-forward line, with the odd midfield appearance, and in accumulating 5-10 from play, at an average of just over 1-3 a game, is her side’s leading scorer.

Dalton also got a goal as Kilkenny launched an ultimately fruitless second-half rally in the League Final against Galway but they gained some measure of recompense for that defeat, albeit with no silverware on the line, when having two points to spare over the Tribeswomen in the opening tie of the Championship. Comfortable victories were registered subsequently against Wexford, Offaly and Limerick.

If Tipperary can get enough possession, and get the deployment of Mary Ryan right – marker or springboard for attacks – they do have the artillery to ask questions of a Kilkenny defence that possesses plenty of redoubtable operators such as Edwina Keane, Emma Kavanagh, Grace Walsh and Collette Dormer but has been largely untested since the Galway outing.

They have also shown that they possess the mindset to roll with the punches, as well as the quality to land a killer blow but Kilkenny exude a sense that the whole year has been about September 8th after their last two agonising near-misses and will be hot favourites.