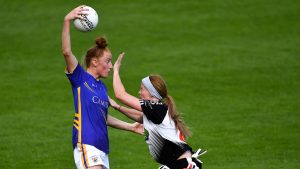 Tipperary booked their place in the TG4 All-Ireland Intermediate Championship decider on September 15 with an accomplished victory against Sligo at Nowlan Park, Kilkenny.

Thanks to star performances from Aisling McCarthy, Aishling Moloney and Caoimhe Condon, who top scored with 2-2, the Munster champions were full value for their victory. Sligo produced a spirited second period display, but ultimately fell to a fourth consecutive semi-final defeat.

Seeking a second title at this grade in just three years, Tipperary stormed ahead early on courtesy of unanswered points by Moloney, full-back Maria Curley, Condon and Angela McGuigan.

Sligo eventually responded through Sarah Reynolds, but a rampant Tipperary continued to dominate proceedings as the action progressed. In between a brace of Moloney points, Condon rattled the net to move the Premier County eight points in front.

Sligo registered a succession of wides during the first-quarter and Sinead Naughton had to work extremely hard for a 13th-minute score. Tipperary, on the other hand, proved to be ruthlessly efficient in front of goal.

Influential midfielder McCarthy and Roisin Daly subsequently added their names to the scoresheet, preceding clinical three-pointers for McGuigan and Condon.

Even though Ciara Gorman breathed some life into the Sligo challenge with a composed finish beyond Lauren Fitzpatrick’s reach, a Moloney free ensured Tipperary brought a 3-10 to 1-2 cushion into the interval.

Despite the heavy deficit they were facing into Sligo played with great heart on the resumption. Following traded frees from Elaine O’Reilly and Moloney, substitute Stephanie O’Reilly unleashed an unstoppable shot to the roof of the Tipperary net.

Another McCarthy point got Shane Ronayne’s side back on track, only for a sublime Lauren Boles strike to raise another green flag for Sligo on the third-quarter mark. While this offered a different look to the scoreboard, Tipperary were never truly in danger of their letting their lead slip.

McCarthy and Katie Cunningham found the target in quick succession to keep them in pole position for a final spot. Boles and Gorman claimed back-to-back points for the Yeats outfit at the opposite end, but it was Tipperary who had the final say through Moloney’s sixth point of the contest. They will now face the winner of today’s second semi-final between Roscommon and Meath at the same venue.

Sligo haven’t had the best of luck in recent All-Ireland semi-finals. The Yeats County lost out to Kildare in 2016, before suffering last-four defeats to Tyrone in 2017 and again last year. The Westerners will hope to go one step further this time but they face a big challenge against Tipperary, the winners from two years ago.

Tipp are the favourites to land the Mary Quinn Memorial Cup again but they were given a stern test of their credentials against Clare at the quarter-final stage. Sligo came through the Offaly challenge to make it back to the semi-finals, and they’re within touching distance of Croke Park for a fourth successive year.

Tipp will start as favourites, but Sligo will hope to upset the form-book and finally vault the semi-final hurdle.