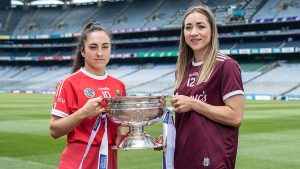 Galway defeated Cork by 0-14 to 1-10 in the Liberty Insurance All-Ireland Senior Camogie Championship Semi-Final on Saturday August 17th at the LIT Gaelic Grounds.

Galway produced a performance of real steel to match their talent to return to the Liberty Insurance All-Ireland Senior Camogie Championship Final for the first time in four years.

They already have National League honours under their belt and will be looking for a first Championship success since 2013. In the process, they put an end to Cork’s reign and the Rebels’ three-in-a-row dreams.

In a one-point game, it is impossible to discuss merit but Galway led from the time Carrie Dolan slotted a 24th minute free and never gave up that lead, despite the savage efforts of their valiant opponents.

Picking a significant moment in such a close affair can be difficult but in the period after Julia White hand-passed to the net for Cork in the 18th minute after a blistering run by Hannah Looney, Galway outscored Cork by six points to one. In the context of how the scoreboard read at the final whistle, that was significant.

Julia White finds the back of the net for All-Ireland champions Cork. pic.twitter.com/RFoBr8ywWe

The workrate on show was phenomenal in a very physical affair and it is certainly an area of improvement among the Tribeswomen in recent years. So too was the tactical approach and in particular, the pressure they placed on Aoife Murray’s puckouts, so often the launching pad for Cork attacks.

Galway would have been delighted too with the amount of space they were able to get Niamh Kilkenny into, and the Pearses flier responded with a player-of-the-match performance.

Cork looked sharp early on despite not having played for four weeks, in comparison to Galway’s two, replying to the concession of an early Ailish O’Reilly point to lead by two, Orla Cotter (free), Linda Collins and Katrina Mackey hitting the target.

Healy proved unbothered by the failure to convert and would go on to make a couple of key interventions, gathering well under heavy pressure just before the break and then making a really good save from a deflection 10 minutes into the second half. Galway didn’t fret either, not even when White put Cork a goal ahead.

They were level four minutes later, Kilkenny splitting the posts and Caitriona Cormican hitting a pair inside 60 seconds.

Cork’s most dangerous attacker, Amy O’Connor restored Cork’s lead but Aoife Donohue and two Dolan scores put some daylight between the sides. There would never be much between them but Galway would always keep their noses in front and it was 0-10 to 1-6 at the change of ends.

The intensity lifted further in the second half, although the scoring rate dropped, and if there were plenty of mistakes, that was assuredly down to the do-or-die nature of the exchanges.

Murray drew Niamh Hanniffy out from the full-forward line to good effect, Aoife Donohue and Kilkenny were flourishing, but at the other end, Cork were heavily reliant on O’Connor to make ground. Hanniffy hit an inspirational point on the hour despite shipping a heavy tackle by Laura Treacy and though O’Connor made it a one-point game again with two minutes of injury time still remaining, Galway held firm for a September 8th date with Kilkenny.

It was notable how Galway manager Cathal Murray eschewed anything more than a cursory acknowledgement of his players’ first-half failings in their Quarter-Final victory against Waterford. That isn’t to say that the players didn’t hear all about it in the dressing room at the interval or again at training since.

But Murray praised Waterford, and rightly so, for the Déise found a new level of performance and maturity.
What’s more, he emphasised the brilliance of his players after the resumption, indicating his belief that they are the equal or better of anyone when hitting top form, and that they possess the necessary mental fortitude to turn things around during a game.

While the former had never been in question, it was doubted whether Galway possessed sufficient self-belief, or a capacity to reverse their fortunes in real time. They do look to have become a steelier crew, physically and mentally since Murray came into the fold after last year’s National League.

Certainly, the manner in which they fended off the Kilkenny rally in the League Final in March and overcame a significant wobble to finish strongly and take the spoils was significant.

Their group got underway with a rematch against the Cats, who had two points to spare at the final whistle, having always been on top in a tight affair. While that was a disappointment, it wasn’t terminal and they are in the same stages of the competition now as if they had won that game.

They haven’t always fired on full cylinders, most notably against Limerick in the group stage, but were never going to lose that, while proving far too strong for Offaly and Wexford to secure primary seeding for the Quarter-Finals.
Waterford provided a real shock to the system and Carrie Dolan’s accuracy from placed balls was crucial to keep them in touch. And but for Sarah Healy’s two brilliant saves early in the second-half, with Waterford leading by four points, who knows what might have eventuated.

But as confidence soared, skipper Sarah Dervan drove on her charges from full-back, Niamh Kilkenny began to make her presence known at midfield and with the full-forward line finally in receipt of ammunition, Ailish O’Reilly and Noreen Coen fired the vital shots.

O’Reilly’s goal killed Waterford off and she has scored 5-15 from five games to date, while Coen is on 1-11. Dolan’s 10 points brought her to 27. Aoife Donohue, Heather Cooney, Tara Kenny and Lorraine Ryan are other key individuals.

Cork finished with a points difference of +83 in Group 2. That runners-up Tipperary were on +5 is an indication of their total supremacy. One area that seems to be established more than any other now is their conditioning, where the added years of elite preparation in this regard compared to many of their rivals, has seen them blow teams away in the second-half, when games have been competitive in the first.

A panel that has claimed the last two All-Ireland titles has been strengthened by the introduction of last year’s All-Ireland-winning Minors and Intermediates, Saoirse McCarthy and Clíona Healy, while Laura Hayes, another member of the 2018 Minors, is in her second season on the panel and Ciara McCarthy is another teenager making their presence felt.

Yet Cork still possesses as strong and experienced a spine as you could wish for, from Aoife Murray, her successor as captain Gemma O’Connor, Orla Cotter and the Mackey sisters Katrina and Pamela. Amy O’Connor continues to be a threat and Linda Collins has benefited from a consistent 2018 to become firmly established in the attack.

Paudie Murray’s squad have gone about their business remarkably quietly for a crew pursuing a three-in-a-row. Failure to get to the League Final would not have caused any sleepless nights but the concern for Murray and his backroom staff will be facing a Galway team that had a real workout a fortnight previously, while not having played themselves for four weeks.

It is not a situation they are unaccustomed to however, and one recalls them being pushed all the way by the same opposition in similar circumstances two years ago. We can expect a cracker once again.