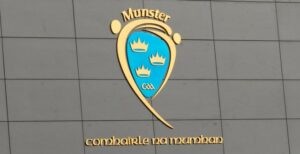 Waterford defeated Kerry by 2-26 to 1-12 in Round 3 of the oneills.com Munster Under 20 Hurling Championship on Wednesday April 20th at Fraher Field Dungarvan.

Padraig Fitzgerald fired 2-4 from play as 14-man Waterford advanced to the semi-finals of the Munster Under 20 hurling championship.

The Kilrossanty corner forward looked razor sharp all night and has now scored 3-6 in two outings. Free taker Aaron Ryan rifled over 12 points. Half backs Joe Booth and Mark Fitzgerald also impressed for Gary O’Keeffe’s charges. The winners were guilty of 15 wides over the hour.

This was another competitive display from Kerry. Midfielder Felim O’Sullivan and wing back Rory O’Mahony were best for John Hennessy’s side.

Waterford made four changes from last week’s loss to Tipperary as Mark Kilgannon, Colin Foley, Willie Beresford and Jake Foley all started. In the sixth minute, Fitzgerald collected a delivery from Ronan Power, beat two defenders and hit the ball into the ground past Keltyn Molloy. He finished the half with 1-3 from play. Four Aaron Ryan points (three frees) and two from Fitzgerald left Waterford nine up by the end of the first quarter (1-6 to 0-0).

On 16 minutes, the leaders were reduced to 14 when corner back Jack O Floinn caught Kerry forward Ronan Walsh on the head with a loose swing. Walsh sent the subsequent free between the posts. O’Sullivan added their first point from play. A Walsh free ended up in the Waterford net but it was ruled out for a square ball.

Ten minutes into the second period, Mark Kilgannon saved from Kerry sub Mikey Kelliher. Booth and Mark Fitzgerald got eye catching points for the home team. Sub Cian Rellis scored with his first touch. Fitzgerald delivered the pick of the bunch when he struck over off his hurley in front of the bank.

With eight minutes left, Fitzgerald found the far corner after Sean Walsh and Jake Foley set him up. The man of the match was denied his hat trick by Kerry number one Keltyn Molloy.

This was Waterford’s first win at Under 20 or Under 21 level since 2016. They will travel to Limerick next Wednesday in the last four.

Best of luck to all of the panel and management team!#deiseabú ⚪🔵 pic.twitter.com/1baqVI5jvP