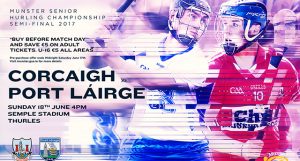 Cork defeated Waterford by 0-23 to 1-15 in the Munster Senior Hurling Championship Semi-Final on Sunday June 18th at Semple Stadium Thurles.

Cork lost corner back Colm Spillane to a second yellow card in the 62nd minute, but held out in front of 33,163 spectators to send Waterford heading for the qualifiers. Conor Lehane was deemed fit enough to start, and scored four points, but he limped off late on with a recurrence of the ankle problem that had threatened his participation.

Anthony Nash said he is so grateful for Cork support…..and they said thank you in return! pic.twitter.com/q3KWtSG8Mv

Cork will now face Clare in the decider – the first Munster senior final between the counties since 1999. It was a generally forgettable afternoon for Waterford, who had hoped to book a third successive Munster final appearance. Hurler of the Year Austin Gleeson produced a couple of classy cameo moments, but didn’t have the impact he or manager Derek McGrath would have wished for – and he was replaced in the second half.

The sides went in level at 0-10 apiece at the end of a rip-roaring first half. They were level three times inside the opening 13 minutes, but Cork held the lead from the 15th minute until Kevin Moran’s equalising point for Waterford just before the interval.

There were some brilliant individual moments to savour, chief among them a wonderful pick-up and Waterford point from an initially grounded Gleeson in the 10th minute.

What a point! Look back at this superb skill from @WaterfordGAA's Austin Gleeson from the #CORKvWAT @MunsterGAA Hurling Semi-Final earlier pic.twitter.com/Flu3qShNod

Cork’s leading scorer Horgan was inches wide with a goal effort minutes later as the game ebbed and flowed.

With both sides adopting a ‘man on man’ approach, it was bubbling up into an absorbing fixture. By the 19th minute, Cork had managed to get three points clear, 0-8 to 0-5, but Waterford continued to battle. Cork’s fifth point was another eye-catching score, Conor Lehane fetching Mark Coleman’s pass brilliantly before racing away and firing over from the Old Stand side of the field.

The respective puck-out strategies were working well – Cork favouring the superb Coleman on the left touchline on more than one occasion, while Waterford were hitting the flanks and trying to keep the ball away from Mark Ellis. The Cork man was effective in the opening half, but his direct opponent, Pauric Mahony, still managed to get away for three points from play.

Content to hold his position, Ellis was prepared to concede some ground to Mahony and this duel was just one of the many sub-plots from an intriguing game. Approaching half-time, Waterford received a massive psychological lift by drawing level.

Anthony Nash said he is so grateful for Cork support…..and they said thank you in return! pic.twitter.com/q3KWtSG8Mv

Before Moran’s equaliser, Waterford goalkeeper produced heroics to deny first Alan Cadogan and then Seamus Harnedy, the latter an absolutely brilliant save low down to his right. Goal opportunities came and went early in the second half and as the game wore on, Cork thrived.

Spillane was dismissed soon after, but Waterford couldn’t find a way back in the closing stages as Cork finished strongly. Shanahan had netted in the 46th minute to draw Waterford level at 1-12 to 0-15, but the Déise could only muster 1-5 after half-time.

Tomas Mulcahy is delighted by the style of hurling a resurgent Cork are playing #GAA pic.twitter.com/BCTMa1UL2L

Ken McGrath says there will be some soul-searching in Waterford after a "leaderless" and "rudderless" display. pic.twitter.com/U9AUb8MM9q