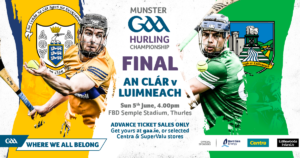 Report By Eoin Brennan at FBD Semple Stadium for GAA.ie

A Munster Final for the ages as it took a full 90 minutes before Limerick finally emerged from an intense wrestle for supremacy with neighbours Clare to secure a first four-in-a-row of Munster titles in 86 years.

In what was an epic, but exceedingly tense provincial showpiece that was level on 14 occasions, remarkably there was never more than a puck of the ball between the sides at any stage until the final minutes.

In the end, the defending champions just had the edge on stamina as their bench appeared much more physically adept to be able to seamlessly blend into such a demanding slugfest.

The performances of chief marksmen from play Seamus Flanagan (0-8) and Tony Kelly (0-7) were exceptional while Aaron Gillane, Sean Finn, Barry Nash, David Fitzgerald and Ryan Taylor were others to stand tallest in a warrior-like cauldron.

Indeed, Tony Kelly’s seven point first half haul ensured that Clare set the early pace for the majority, only to be spectacularly reeled in when Tom Morrissey offloaded to Gearoid Hegarty to skilfully beat his marker and fire to the bottom right corner of the net at 1-9 to 0-12 by the 27th minute.

That stalemate remained until the break at 0-14 to 1-11 and the sides would sustain that compelling blow-for-blow pattern for the bulk of the second period before Limerick centre-back Declan Hannon stepped up to arrow over a booming point from his own ’65 deep into injury-time.

It looked to be the clinching score but fellow captain Tony Kelly had other ideas and admirably stepped up to take a lineball in the left corner which he duly converted with the last puck to force extra-time at 0-24 to 1-21.

It would be the last time that the sides were deadlocked however as Limerick’s fresh legs from the bench saw them find an extra gear alongside Gillane and Flanagan.

A flagging Clare still refused to yield, but saw their attacking triumvirate of Tony Kelly, Shane O’Donnell and Peter Duggan all retire before the finish.

Instead Limerick substitutes Conor Boylan and David Reidy powered the holders four in front by the 86th minutes, with a late Mark Rodgers goal chance just deflected over the bar to ensure that the holders preserved their kingpin status in Munster.

SOLD OUT – following the sale of the last remaining terrace tickets earlier today, Munster GAA can now confirm that Sunday’s Munster Hurling Final will have a sold out capacity of over 45,000 people.

Clare’s starting line up and bench for Sunday’s Munster SHC Final. Throw in is at 4pm in Thurles . #UptheBanner pic.twitter.com/3akA2uChb8

N.B. PLEASE USE ALTERNATIVE ROUTES SUGGESTED HEREUNDER AND ALLOW EXTRA TIME FOR YOUR JOURNEY AS A LARGE CROWD of 45,000 IS EXPECTED.

1. The area in the immediate vicinity of FBD Semple Stadium will be kept completely free of parked vehicles and controlled by Garda Barriers. Entry to this area Strictly with Residents Pass

2. Match traffic is not permitted to park on footpaths in the vicinity of FBD Semple Stadium. Parking tickets will be issued to vehicles parked on footpaths or parked illegally

3. Car parks will be available on all approach routes to Thurles and we urge that they be used by all patrons on their particular route thus avoiding unnecessary delays after the match.

4. Arrive in Thurles in good time for the matches, delays can be expected on all routes to Thurles.

5. Co-operate with the car park attendants and Gardai to ensure the free flow of traffic.

6. The area in the immediate vicinity of FBD Semple Stadium will be kept completely free of parked vehicles and controlled by Garda Barriers.

7. The housing estates at the rear of FBD Semple Stadium form an EMERGENCY ROUTE from the Stadium and any vehicles not belonging to residents will be towed, without exception.

8. Please do not abandon cars on the main routes. Keep driving until you meet Gardai on duty at relevant car parks. If you must park on the road ensure your car is turned for home, this is to ensure the minimum of delay after the matches.

9. A traffic diversion programme will be in place within Thurles and all motorists are asked to be patient during its operation. Every effort will be made to ensure that motorists can transgress the town with a minimum of delay.

Limerick supporters have an option on the following main routes:

4. Via Limerick or Killaloe and Birdhill travel the M7 to Nenagh and the R498 via Borrisoleigh and the Ragg to Thurles

5. Via Limerick or Killaloe and Birdhill travel the M7 to Roscrea/Templemore N62 to Thurles

Clare supporters have an option on the following main routes:

4. From Ennis or Killaloe and Birdhill, and travel the R503 to Newport and via Milestone to Thurles.

5. Via Limerick or Ennis, Killaloe and Birdhill travel the M7 to Nenagh and the R498 via Borrisoleigh and the Ragg to Thurles.

6. Via Limerick or Killaloe and Birdhill travel the M7 to Roscrea/Templemore N62 to Thurles

1. Patrons in possession of passes (G.A.A. and Invalid) should display same in a prominent place on their vehicle and follow the Garda directions en route. These passes are not parking permits but allow free movement subject to Garda discretion and traffic control.

2. Thurles Gardai do not issue passes.

Vehicles found illegally parked will be towed away to the Garda Compound and will not be released until the statutory expenses (€125) have been paid. In addition a prosecution could be instituted against the driver / owner of the vehicle concerned.

The Gardai appeal to all motorists to:

1. Secure and lock their vehicles.
2. Leave no valuables on display.
3. Park in supervised car parks.
4. Pick Pockets – beware of your wallet, money and A.T.M/Credit Cards. Leave your wallet at home if possible. Do not carry large sums of cash.
5. Alcohol, Claxton Air Horns and Vuvuzelas will not be allowed into Semple Stadium.

We appeal to all concerned to make this outing a memorable day for the right reasons and to co-operate with Gardai, Stewards and encourage others to do the same.

Parking arrangements for this Sundays Munster Senior Hurling Final between @GaaClare & @LimerickCLG and All Ireland Camogie Championship between @camogietipp & @deisecamogie . Best wishes to all the teams taking part and safe travelling to FBD Semple Stadium. pic.twitter.com/yTmiXxnj4I

Don’t forget to pick up a copy of the 72 page souvenir match programme for Sunday’s game for 5 euro. 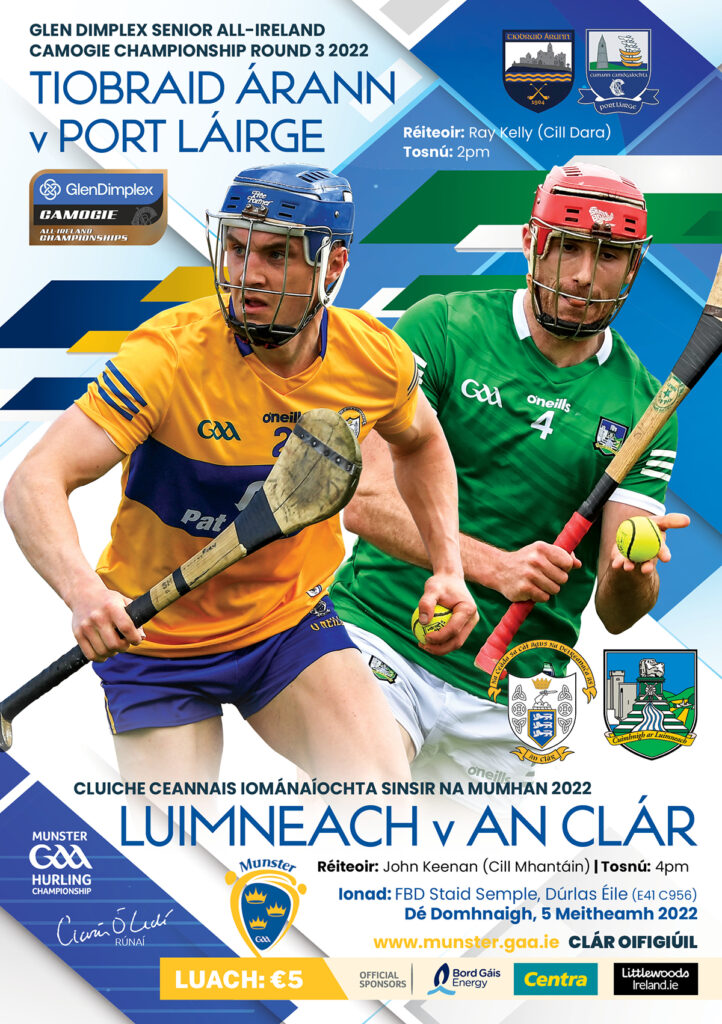 They meet in the Munster final for the first time since 1995 when Clare won. Limerick are bidding to win the title for the 23rd time; Clare are seeking their seventh success.

This will be the 60th championship game between the counties. Limerick won 37 to Clare’s 20 with two draws, from the previous 59.

The sides met in this year’s Allianz League when it finished level (0-18 each) in Ennis in early March.

Clare manager, Brian Lohan was one of the stars in their last Munster final win over Limerick in 1995 when they took the title for the first time in 63 years.

John Kiely is in his sixth season as Limerick manager. Their championship record in that period reads: Played 28; Won 21, Drew 2, Lost 5.