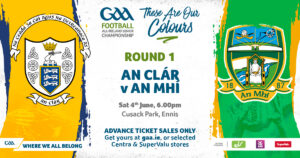 Clare defeated Meath by 1-11 to 1-9 in Round 1 of the All-Ireland Senior Football Championship on Saturday June 4th at Cusack Park Ennis.

Colm Collins' @GAAClare side defeated @MeathGAA in a dramatic opening All-Ireland Football Championship Round 1 tie in Cusack Park, Ennis on Saturday evening as the Banner got over the line with late points from sub Keelan Sexton and Manus Doherty. Watch GAANOW highlights below! pic.twitter.com/DgtAU0DH9X

Report By Eoin Brennan at Cusack Park for GAA.ie

Clare finally banished their Meath hex in a dramatic opening All-Ireland knock-out tie in front of 2,460 in Cusack Park Ennis this evening.

Andy McEntee’s side had held the Indian sign over the Banner with five successive victories in as many seasons but despite a frustrating second half display with the aid of the strong conditions that included a penalty save and eight wides, Clare persisted to relievedly fall over the line with late points from substitute Keelan Sexton and Manus Doherty.

The hosts had started superbly against the conditions, with points from Eoin Cleary, Emmet McMahon and Darren O’Neill bolstered by a 12th minute goal for Pearse Lillis to power Clare into a 1-3 to 0-0 advantage by the end of the opening quarter.

Lillis nipped in ahead of Harry Hogan to flick a dipping Eoin Cleary point attempt to the net but the goalkeeper immediately made amends when denying the goalscorer from point blank range only four minutes later.

Indeed, it took Meath 18 minutes to finally get off the mark through Thomas O’Reilly but it did little to alter the narrative as Clare only extended their cushion to seven at 1-6 to 0-2 by the 27th minute.

Meath, who sorely lacked a scorer-in-chief throughout, did find some solace from their collective as Jack O’Connor, Jason Scully, Eoin Harkin and Cillian O’Sullivan lessened the half-time damage to just four at 1-7 to 0-6.

Remarkably, Clare would suffer the same profligate fate with the wind at their backs for the new half as six third quarter wides would be punished by Meath whose challenge would be ignited by a 40th minute lifeline goal.

Half-time substitute Joey Wallace cut in from the left corner only to be felled for a penalty that full-back Conor McGill cooly dispatched to the bottom right corner of the net. Daithi McGowan regained full parity by the 43rd minute and with Clare now taking 18 minutes to open their second half account, a Bryan McMahon free actually inched the visitors in front for the first time in the 52nd minute at 1-8 to 1-7.

Inevitably, it was Eoin Cleary that ended Clare’s barren patch before the home captain also reeled in a Cillian O’Sullivan point with a 59th minute free at 1-9 to 1-9.

With the anxiety levels rising, a superb last gasp tackle from Manus Doherty on a Donal Keogan goal effort at on end transitioned into a penalty at the other only seconds later when Keelan Sexton was dragged back on his way to goal.

However, David Tubridy’s 63rd minute penalty would be acrobatically tipped away by goalkeeper Hogan as was Sexton’s powerful shot six minutes later to leave the sides deadlocked.

Sexton did convert the resulting ’45 to put the home side back in front for the first time in 16 minutes while an excellent clincher from corner-back Doherty finally completed Clare’s passage to the last 12 next weekend.