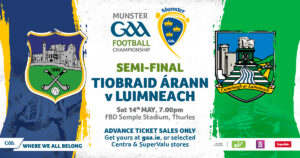 Limerick defeated Tipperary by 2-10 to 0-10 in the Semi Final of the Munster Senior Football Championship on Saturday May 14th at FBD Semple Stadium Thurles.

Limerick booked a Munster Senior Football Final date with Kerry after producing a strong second half performance to see off Tipperary in Thurles last Saturday – watch below on GAANOW! pic.twitter.com/vvCZ3WbRYo

Victory over Tipperary in this evening’s cagey provincial semi-final represented the first time in 13 years that the county has won two Munster championship games in the one season. And it was a victory richly deserved, Billy Lee’s charges striding out of Tipperary’s reach during a final quarter played out almost exclusively in Tipperary’s half.

That the sides were still level after 52 minutes had much to do with Limerick wastefulness as they had kicked six second-half wides by this juncture, including a goal effort, as well as hitting the post.

Sub Robbie Bourke edged the men in green ahead with his first involvement on 53 minutes and in the ensuing play came their second goal, Brian Donovan the finisher after being put through by Cian Sheehan.

Cillian Fahy’s third point from midfield thereafter left the scoreline reading 2-7 to 0-8 and left Limerick with one foot in the Munster final.

Hugh Bourke and Robbie Bourke added late points to stretch the final winning margin to six, with Limerick having outscored their opponents 1-5 to 0-2 across the final 23 minutes of action.

The first half was incredibly poor fare, devoid of any semblance of fluidity, creativity, and for large swathes, scores.

Both teams packed their respective defences, and while this was hardly the first time either side was faced with a heavily populated rearguard, nobody seemed to have any great idea as to how to go through or around these blanket set-ups.

Tipperary did not score from play until the 20th minute, while no member of their starting front six found the target from play in the first 35 minutes.

On the Limerick side, when the Treatymen delivered a quickfire 1-1 around the 11th minute mark, the impression was given that they had struck upon a weakness in the Tipperary defence, but they added only one more point between there and half time, while they went scoreless in the 20 minutes directly after Cillian Fahy’s second point put the visitors 1-2 to 0-2 ahead.

It was full-forward Josh Ryan who provided their goal, after the lively Brian Donovan’s shot had been repelled by Tipp ‘keeper Michael O’Reilly.

Tipperary’s second half fall-off is captured in the two stats showing they did not kick their first score of the second period until the 48th minute, that super Shane O’Connell punt their sole second half score from play.

Tipperary’s Division 3 League status means they will be part of Monday’s Tailteann Cup draw. As for Limerick, they’re headed for a much, much bigger stage in Killarney on Saturday, May 28.

Interesting games are on the agenda in the Munster, Leinster, and Ulster SFC this weekend

Don’t forget to pick up a copy of the 32 page match programme for 3 euro. 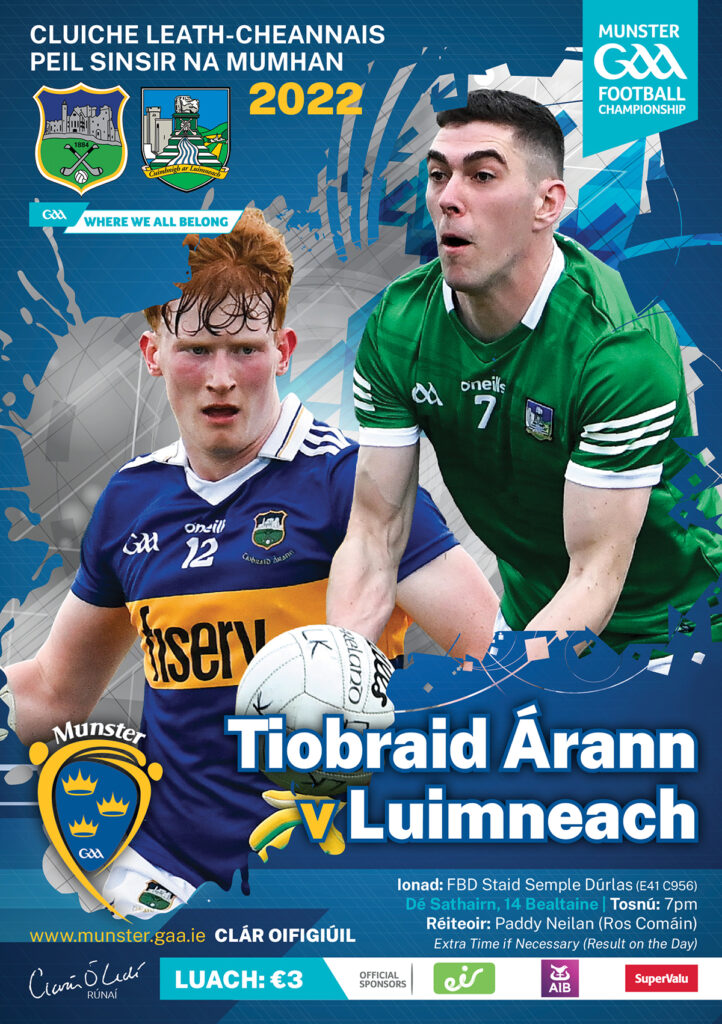 The Tipperary Senior Football team has been named. pic.twitter.com/iZvXJBM6Oe