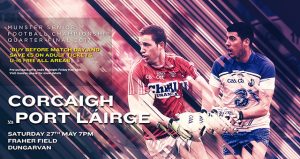 Cork defeated Waterford by 1-12 to 1-11 in the Munster Senior Football Championship Quarter-Final on Saturday May 27th at Fraher Field Dungarvan.

Report By John Fallon for GAA.ie

A brave Waterford effort came up just short at Fraher Field in Dungarvan.

Cork were forced to dig deep to prevent a shock, loss but the Rebels came good in the closing minutes to set up a semi-final date with Tipperary. Cork played against the wind in the opening half and while they struggled to deal with Waterford’s crowded defence, they were well on their way to victory when they led by 1-4 to 0-4 at the interval.

Waterford packed out their defence, regularly keeping two sweepers in position and, inevitably, Cork struggled to find the space to kick scores. Waterford were dependent on breaking from deep and trying to exploit the open spaces up front, but scores were hard to come by at either end.

Waterford shot six wides in the opening half with the wind while Cork kicked seven at the other end, constantly having to shoot under pressure in a crowded sector. Waterford suffered a huge blow after 18 minutes when a lapse saw Mark Collins solo through before crossing for Paul Kerrigan to fist to the net.

That put the Rebels 1-1 to 0-2 in front and took the wind out of the Waterford challenge, having twice led prior to that with the breeze behind them. Donie Breathnach got them off the mark with a fifth minute free which John O’Rourke cancelled with the first of his three excellent points from play in the opening half.

Tommy Prendergast went forward to edge the Deise back in front after eight minutes before 10 scoreless minutes were ended when Kerrigan fisted home from close range, Waterford responded well with Michael Curry pointing before O’Rourke got another good effort from the right.

Aidan Trihy cut the gap to a point a minute from the break, but Cork finished the half strongly and efforts in stoppage time from O’Rourke and Kerrigan saw the Rebels lead by 1-4 to 0-4 at the interval. Waterford goalkeeper Stephen Enright produced a superb save to deny Colm O’Neill just 17 seconds after the restart.

And then Waterford responded by finding the net to tie the match when Gavin Crotty shot low to the right corner after goalkeeper Ken O’Halloran failed to hold a free from distance by Joey Veale.

Captain Paul Whyte then edged Waterford in front after 43 minutes with a point from the right to make it 1-5 to 1-4. Donie Breathnach doubled that lead after 50 minutes before Cork hit back with points from Donncha O’Connor and James Loughrey.

The sides then exchanged points twice before Cork, who lost Alan O’Connor to a red card after 65 minutes, went two in front from Paul Kerrigan and Donncha O’Connor. Waterford hit back in a frenetic finish and levelled through Paul Whyte and the excellent Breathnach to tie them heading into seven minutes of stoppage time.

Colm O’Neill and Kerrigan saved Cork with points before they endured a nervous finish when Breathnach cut the gap to the minimum, but Waterford ran out of time after a brave effort.

Cork got a huge scare against Waterford and just survived to reach Munster semi-final https://t.co/E1yvoj8Mou pic.twitter.com/Uzn3hTy54O

The Cork team to play Waterford in the Munster Senior Football Championship Quarter-Final next Saturday 27th May in Fraher Field, Dungarvan @ 7pm has been announced as follows.

WATERFORD v CORK
They meet in the championship for the first time since 2011 when Cork easily won a Munster semi-final clash.