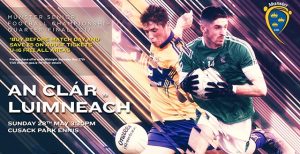 Clare defeated Limerick by 1-13 to 1-12 in the Munster Senior Football Championship Quarter-Final on Sunday May 28th at Cusack Park Ennis.

Report By Peter O’Connell for GAA.ie

Clare scraped into a second successive Munster semi-final meeting with Kerry when they held on for a one point win over Limerick in Cusack Park.

Clare were four points ahead in the second minute of injury time when Limerick’s Seán O’Dea intercepted a Joe Hayes kick out. O’Dea placed substitute Josh Ryan and his goal reduced the deficit to a single point. Limerick had a chance to fashion an equaliser but Seán McSweeney’s shot went high and wide, when a bit more patience might have been the better option.

Twelve minutes from time Clare led by six points, 1-11 to 0-8 and a Limerick comeback looked very unlikely. However that Ryan goal left Clare clinging on in in injury time.

In a game which was played in front of an attendance of 2,968, the home team led 1-8 to 0-6 at half-time. Eoin Cleary put away their goal in the ninth minute. He held off Limerick corner-back Daniel Daly, collected a Jamie Malone long delivery and applied a right footed finish.

Keelan Sexton pointed two quality points for Clare in that half, while Pearse Lillis also pointed, raiding from wing back. A feature of the first half was the fact that while Limerick gave the ball away sixteen times, Clare were much more efficient in this respect, turning over just five first half possessions.

However Limerick could have goaled twice in that half, with David Ward shooting low and wide in the 22nd minute, while in first half injury time Seamus O’Carroll had a shot saved by Joe Hayes, who diverted it around for a 45. Eoin Cleary kicked Clare six points ahead immediately after half-time but the home county then dropped the tempo and the following 15 minutes were scoreless, until Danny Neville kicked a Limerick point.

Clare had two goalscoring chances with Jamie Malone and Keelan Sexton not taking full advantage of good opportunities. Sexton produced a good save from Limerick goalkeeper Donal O’Sullivan, nine minutes from time. A goal at that juncture would have finished Limerick but instead they stayed in the game and Ryan’s late goal almost helped them to rescue at least a replay.

Both teams went short with most of their kick outs and the game featured just one mark. In fact both struggled to retain their own kick outs, on the rare occasions that they went long.

Clare will have to improve radically if they are to compete with Kerry on Sunday week, while Limerick will have to wait until the weekend of June 24 before they return to championship action in the All-Ireland qualifiers.

This is an unreserved fixture.
BUY BEFORE, PAY LESS

Our senior Football team v Clare this Sunday in Ennis. Throw in at 3.30. All support appreciated. Best of luck to all involved #LuimneachAbu pic.twitter.com/uhvBRCZn8U

Limerick senior football manager Billy Lee and his selectors has released their starting fifteen and match panel for this Sundays clash with Clare for the Munster senior football championship quarter final. Billy Lee and his selectors Paudie Kissane, Brian Begley and Ricky Ronayne has released the following team and match panel game for the Cusack Park Ennis clash at 3.30pm.

They meet for a second successive year in the Munster championship, with Clare having won by three points in the Gaelic Grounds last May. It was their third successive championship win by the Bannermen, leaving Limerick seeking their first win over their neighbours since 2009.

DID YOU KNOW?
It’s 21-10 in Clare’s favour with five draws from the previous 36 championship games between the counties