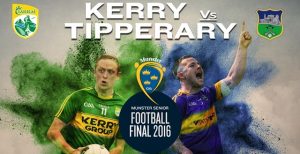 Kerry defeated Tipperary by 3-17 to 2-10 in the Munster Senior Football Championship Final on Sunday July 3rd at Fitzgerald Stadium Killarney.

No fairytale for Tipperary as Kerry take Munster football crown

Éamonn Fitzmaurice made it four Munster Championships from four as Kerry eased to victory in a lacklustre final in Fitzgerald Stadium, writes John Fogarty.

A decent crowd of 21,512 watched on as both teams provided goals galore but little in the way of quality other than the class shown by Paul Geaney in grabbing 2-3 and Paul Murphy with his first-half performance.

Tipperary can take solace from winning the midfield battle for the most part but the return from the forwards was poor and it wasn’t until the 53rd minute that they actually scored a point from play.

Like their opening goal, the second came from a defender in Robbie Kiely, set up by Michael Quinlivan, in the 50th minute but Kerry were 11 up prior to it having found the net for a third time when Geaney turned superbly on gathering a David Moran ball before dashing and firing past Evan Comerford.

Although they trailed 2-7 to 1-4 at half-time, Tipperary couldn’t have dreamed of a better start when Jimmy Feehan, a late replacement for Martin Dunne, ran onto a Philip Austin pass to beat Brian Kelly. Yet it turned out to be the visitors’ only score from play in the first half.

Kerry were settled picking up three of the next four scores, Geaney adding a brace although the exit of Colm Cooper with a collarbone injury in the 21st minute was a worrying development for the home crowd. Tipperary jumped ahead with a couple of Kevin O’Halloran frees but Paul Murphy had Kerry in front for the first time in the 18th minute, finishing off a slick move to the net.

Darran O’Sullivan opened his account six minutes later but Comerford was beaten again seconds later, Aidan O’Mahony and Cooper’s replacement Michael Geaney showing some fine foot-passing to set up Paul Geaney for Kerry’s second goal. O’Halloran, with his third free, ended a 17-minute barren spell for Tipperary to finish out a first half that was middling in quality.

The Kerry team V Tipperary has been announced:… https://t.co/7yWSNd3i7o

The Kerry Senior Football Team to play Tipperary in the Munster Senior Football Final at Fitzgerald Stadium on Sunday is unchanged from the side that started against Clare in the semi final.
In the subs, Aidan O’Mahony returns after suspension and James O’Donoghue returns to the match day squad for the first time since last year’s All Ireland Final.

Additional Info:
Brian Ó Beaglaioch (An Ghaeltacht) – Made his Championship debut against Clare in the semi final having made his League debut against Dublin in the AFL Round 1 earlier in the year. He also played in the McGrath Cup in January. Brian won an All Ireland Minor medal with Kerry in 2014 in the full back position and has 2 Hogan Cup (2014 & 2015) and 3 Munster Colleges Corn Uí Mhuirí medals being joint Captain with Mark O’Connor for Pobal Scoil Chorca Dhuibhne last year.
Tadhg Morley (Templenoe) – A Primary Teacher, Tadhg played Minor for Kerry in 2010 and 2011 and Under 21 for the county in 2012 and 2013. He was centre back on the Kerry team that won the All Ireland Junior title last year. He captained Templenoe to County, Munster and All Ireland Club titles 2015/16.
Darran O’Sullivan (Glenbeigh-Glencar) – Who made his championship debut in the All Ireland Final of 2005, played in his 60th Championship game in the semi final. He has scored 9-34 in championship football.
Marc Ó Sé – Should Marc make an appearance as a sub, he will be just 1 game away from joining his brother Tomás on 88 Championship games for Kerry which is a county and national record.
Allianz League Final – The team shows 5 changes from the side defeated by Dublin in the Allianz League Final with Brian Kelly, Killian Young, Brian Ó Beaglaoich, Tadhg Morley and Paul Geaney replacing Brendan Kealy, Marc Ó Sé, Aidan O’Mahony, Fionn Fitzgerald and David Moran.
All Ireland Final 2015 – In all, the team shows 8 personnel changes from the side that took the field in the All Ireland Final last September – .Brian Kelly, Mark Griffin, Brian Ó Beaglaoich, Tadhg Morley, Kieran Donaghy, Bryan Sheehan, Paul Murphy and Darran O’Sullivan replace Brendan Kealy, Fionn Fitzgerald, Aidan O’Mahony, Jonathan Lyne, Anthony Maher, David Moran, Johnny Buckley, and James O’Donoghue.

The Tipperary team to take on Kerry in the Munster Senior Football Championship Final, on Sunday next, July 3rd at 2pm in Fitzgerald Stadium, Killarney has been announced by manager Liam Kearns.

In what will be the first meeting of the sides in the provincial decider since 1998, Liam Kearns’ side will be looking to build on the great progress made in recent years and are looking forward to what is a first senior final appearance for all players.

The Tipperary team lines out as follows –

KERRY v TIPPERARY
They meet in the Munster final for the first time since 1998 when Kerry, the then reigning All-Ireland champions, won by 0-17 to 1-10 in Thurles. Maurice Fitzgerald scored 0-10 for Kerry while Declan Browne responded with 0-7 for Tipperary. Prior to that, Kerry and Tipperary hadn’t met in the Munster final since 1944. While Munster finals between the counties are rare, it has been a busy rivalry in earlier stages of the provincial championship – this will be the sixth clash between them since 2010. Tipperary are bidding to win the title for the first time since 1935; Kerry are seeking a fourth successive success. Kerry have reached the All-Ireland quarter-finals every year since they were introduced in 2001 while Tipperary have yet to reach the last eight.

MOST RECENT CHAMPIONSHIP GAME
Kerry 2-14 Tipperary 2-8 (2015 Munster semi-final, Semple Stadium)
Kerry led by 2-6 to 2-4 at half-time and won the second-half by 0-8 to 0-4. Paul Geaney and Barry John Keane were Kerry’s goal scorers while Michael Quinlivan scored both of Tipperary’s goals.

DID YOU KNOW?
If Kerry win, it will be their first Munster four-in-a-row success since taking all eight titles between 1975 and 1982.