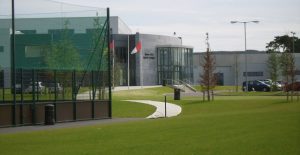 Schools were selected by each of the six counties in Hurling and in Football to attend the Provincial finals following skills tests in each of the counties. Each team consisted of three players and each player had to undergo a series of tasks to obtain points for his or her team. Chairman of the Munster GAA Games Development Committee, Jerry O’Sullivan, praised the payers for the exceptionally high standard achieved by all the schools in closely fought competitions in both codes. He thanked the school teachers for preparing the pupils from all schools that participated in all the counties and thanked them for their commitment to promoting Gaelic Games in the schools. Cork Dual Star, Aidan Walsh, presented awards to the schools with the highest scores and presented every participant at the finals with award. The hurlers received a hurley grip and a wall ball each and the footballers received a pair of gloves and a mouthguard each. The schools that represented each county were as follows: