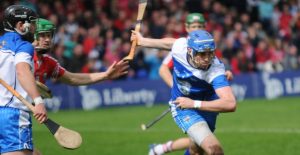 Cork have beaten Waterford by 14 points in this afternoon’s Munster senior hurling championship quarter-final replay at Semple Stadium.
The Rebels upped the ante considerably from a fortnight ago to blow Waterford away in front of 22,093 spectators in Thurles.

By half-time, Cork were 0-14 to 0-5 clear and in sight of a provincial semi-final showdown with All-Ireland champions Clare next Sunday. That clash is, of course, a repeat of the classic 2013 All-Ireland finals between the counties. This was impressive stuff from Cork against a Waterford side that registered 15 wides over the 70 minutes.

And the Déise suffered a crushing injury blow as early as the fifth minute when Noel Connors, detailed to pick up Alan Cadogan, limped off injured.
Waterford also lost Colin Dunford to injury later in the game but those setbacks shouldn’t detract from an impressive Cork display, as ten different players got on the scoresheet.

Horgan led the way in the scoring stakes but there were impressive attacking displays, too, from Conor Lehane, Seamus Harnedy and Bill Cooper. And there was also a welcome return for Paudie O’Sullivan following the horrific leg break the Cloyne clubman sustained last year. And O’Sullivan marked his comeback with two points from play after coming on as a second half substitute. Cork could even afford the luxury of a missed penalty before half-time.
Following a foul on Pa Cronin, Anthony Nash came forward from the Cork goal to unleash one of his trademark blockbusters. But in a move reminiscent of Clare goalkeeper Patrick Kelly last year, Waterford netminder Stephen O’Keeffe came rushing from his goal-line to meet Nash at the point of contact and smother the shot.
***
Scorers for Cork: P Horgan 0-10 (5f), C Lehane 0-4, B Cooper & S Harnedy 0-3 each, D Kearney & P O’Sullivan 0-2 each, C Joyce, A Cadogan, S Moylan & R O’Shea 0-1 each.

Cork leave nothing to chance in emphatic win over Waterford http://t.co/kN0GBkMDXZ

Munster GAA can confirm that all pre-purchased adult tickets for the Munster GAA Senior Hurling Quarter-Final Replay between Cork and Waterford will be reduced by €5. Tickets will go on sale via tickets.ie, Centra & Supervalu from Tuesday May 27th.

Venue Price on the day

The Cork v Waterford Munster SHC replay will be streamed live worldwide on http://t.co/OWsOhcEYI3 and @RTEplayer on Sunday 8 June

Next Round – the winners qualify for the Munster Semi-Final against Clare on Sunday June 15th at Semple Stadium Thurles or the Gaelic Grounds Limerick.

It’s 8 years since Cork won the Munster championship – the longest gap since the 10 year period between their 1956 and 66 wins.

Until last year, Limerick had won only 1 of their previous 17 Munster Senior Hurling Championship matches, a victory over Tipperary in the 2007 Munster Semi-Final 2nd replay at Pairc na nGael. During that period, Limerick drew 5 times. Until last Sunday’s victory over Tipperary at Semple Stadium, Limerick’s last Championship victory away from Pairc na nGael came in 2001 with victories over Cork and Waterford at Pairc Ui Chaoimh.

With Limerick’s victory last year, Clare are the only one of the 5 participating counties not to have one the Munster SH Championship since the turn of the millennium.

Declan Hannon of Limerick was the top scorer in last year’s Munster championship with 0-17 from 2 games. Patrick Horgan of Cork was second in the list with 0-12 from 2 games.

Waterford have failed to win their last 3 Munster SHC games, a feat last recorded from 1999 to 2001

Both teams scored 1-11 from play in the drawn game

Waterford had 9 different scorers from play in the drawn game

Cork had 6 different scorers from play in the drawn game