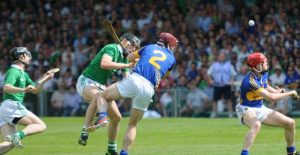 Report: @LimerickCLG are through to the Munster final after emerging from a classic encounter with @TipperaryGAA: http://t.co/PUCsqNgFB9

Munster champions Limerick are through to another provincial senior hurling final after stunning Tipperary in Thurles on Sunday afternoon.
The Shannonsiders repeated last year’s magnificent success over the Premier County by scoring a two-point win at Semple Stadium. Despite losing joint-manager Donal O’Grady recently, Limerick delivered another big championship display to leave Tipp heading for the qualifiers again. In front of 24,962 spectators in Thurles, TJ Ryan’s battlers came from three points down late on to record a landmark win.

Shane Dowling, scorer of 2-9, banged home his only score from play, an equalising goal in the 68th minute. Sub Thomas Ryan pushed Limerick a point clear in the first minute of stoppage time and with referee Barry Kelly about to blow for full-time, Seamus Hickey stormed up the pitch to land the insurance score at the Killinan End.

And so Limerick are through to another Munster final on July 13, with Cork, Waterford or Clare to provide the opposition.
But at half-time, there was nothing to separate Limerick and Tipperary as the sides went in level at 1-8 apiece. Dowling banged home a 20m free for the game’s opening goal but powerful Tipp forward Patrick ‘Bonner’ Maher replied in the 21st minute with a goal for the hosts.
That strike gave Tipp some badly-needed oxygen after they had trailed by 0-4 to 1-5. But Limerick hit back again to lead by four points – 1-8 to 1-4 – before a point from John O’Dwyer and three from Seamus Callanan (including two frees) ensured parity at the break.

Tipp got off to the ideal start in the second half when Gearóid Ryan netted, but the sides were level five times before that late, late intervention from the Treaty men. Remarkably, this was Limerick’s first championship win over Tipperary in Thurles since 1973 – and their first Munster championship victory of any description at this venue in 17 years.
***
Scorers for Tipperary: G Ryan 1-2, Patrick Maher 1-0, S Callanan 0-5 (3f), J O’Dwyer 0-5 (1f), N McGrath, N O’Meara, L Corbett & D Maher 0-1 each.

Good quality tickets, including central stand tickets for this game are now available for sale online and via Centra & Supervalu stores. See the ticket pricing structure below.

To book your tickets now, visit tickets.ie or click here

Tipperary vs Limerick – Web fares from €9.99 each way

An individual pre-purchasing a package ticket for the both the Limerick / Tipperary Football Quarter-Final in the Gaelic Grounds (on Saturday May 31st) and the Limerick / Tipperary Hurling Semi-Final in Thurles (on Sunday June 1st) will get €10 off the overall price. For example, instead of purchasing a general admission adult ticket at €15 for the football and a €30 covered stand ticket for the hurling (total of €45), by availing of the package ticket the price will be reduced from €45 to €35.

Note that the Dual Package must be pre-purchased via tickets.ie or Centra & Supervalu outlets and subscribers will get 1 ticket which will work for the games on both May 31st and June 1st.

The usual Student / OAP concessions will also apply, meaning that a person in these categories will get entry to both games for just €20 using the package to gain entry to the Covered Stand for the Hurling game and just €10 if you wish to watch the Hurling game from the Terrace.

Club Juvenile Discount Package
A club that pre-purchases a Club Juvenile Discount Package will get 10 juveniles entry to the stand for €3 and one adult mentor free of charge with every 10 juveniles. This works out at €2.72 per person. Clubs should contact Mary O’Mahoney at Munster GAA (061-338593 or mary.omahoney.munster@gaa.ie) for more details of how to book this package.

Next Round – the winners qualify for the Munster Final against Cork / Waterford or Clare on Sunday July 13th at 4pm.

Waterford (Derek McGrath) and Limerick (TJ Ryan) both have new managers for the 2014 season. All 5 counties are managed by natives of their own county.

The Munster Championship will be without 2 players this year who played in over 40 Munster championships between them – Tony Browne of Waterford and Brendan Cummins of Tipperary.

Limerick have 1 current hurling All Star – Richie McCarthy while Tipperary have none.

Until last year, Limerick had won only 1 of their previous 17 Munster Senior Hurling Championship matches, a victory over Tipperary in the 2007 Munster Semi-Final 2nd replay at Pairc na nGael. During that period, Limerick drew 5 times. Limerick’s last Championship victory away from Pairc na nGael came in 2001 with victories over Cork and Waterford at Pairc Ui Chaoimh.

Clare have not drawn a match in the Munster Senior Hurling Championship since finishing level with Tipperary in 1999.

Limerick and Tipperary have both lost 26 Munster Senior Hurling Finals. Cork have lost 30.

The first 3 games in the Munster Championship in 2014 will be refereed by the 3 men who between them have refereed the last 5 senior hurling All Irelands – Cork v Waterford (Brian Gavin – 2011 final and 2013 drawn final), Tipp v Limerick (Barry Kelly – 2012 drawn final) and Clare v Cork / Waterford (James McGrath – 2012 and 2013 replays). Interestingly, these 3 men refereed all 4 games in last year’s Munster championship with McGrath in charge of the quarter-final and final and Gavin and Kelly each refereeing a semi-final. They refereed 3 of the 4 games in the 2012 championship – Cathal McAllister of Cork refereed the final. Gavin and Kelly refereed 3 of the 4 games in 2011 – James Owens refereed the 4th. Barry Kelly refereed the last Semple Stadium championship meeting of Tipperary and Limerick in 2012.

With Limerick’s victory last year, Clare are the only one of the 5 participating counties not to have one the Munster SH Championship since the turn of the millennium.

Declan Hannon of Limerick was the top scorer in last year’s Munster championship with 0-17 from 2 games. Patrick Horgan of Cork was second in the list with 0-12 from 2 games. He equalled that on Sunday when scoring 0-12 against Waterford.