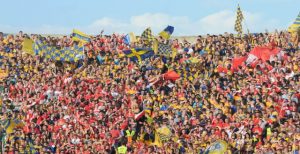 Jimmy Barry-Murphy’s Cork have defeated Clare by five points in this afternoon’s Munster SHC semi-final at Semple Stadium. Patrick Horgan scored 2-11 from placed balls for the Rebels, who will now meet Limerick in a second successive provincial decider on July 13.

This was sweet revenge for Cork – who lost to Clare after two classic All-Ireland finals last September. And Horgan was the star turn in front of 28,660 spectators in Thurles – hitting 1-8 before half-time, with 1-3 added in the second half. Horgan found the net from a free in the 33rd minute – striking the ball from the 20m line and surprising the Clare players on the goalline after the initial award was given a couple of metres further back.

And Horgan struck again with eleven minutes remaining, lashing home a penalty at head height to establish a 2-20 to 1-16 lead for Cork. Two minutes later, Paudie O’Sullivan flashed over a point with his first touch after coming on as a substitute and Cork were rampant. The tie was effectively over as a contest as Clare – playing their first competitive game for eight weeks – struggled to cope. In between, Cork had come through two games against Waterford and they looked sharper and fitter all over the pitch as the game wore on.

Cork had the breeze from the start but the sides were level six times before Horgan put some daylight between them approaching half-time.
There was still time for John Conlon to find the net from close range with a Clare goal that kept the Banner County in touch at half-time, trailing by 1-10 to 1-13. Clare were back to within two points of the winners twice in the second half but Cork held their nerve and a quickfire brace of scores from Daniel Kearney within a minute were massive points.

Horgan’s penalty strike, buried following a Brendan Bugler foul on Seamus Harnedy, put the seal on a memorable Cork display and the Leesiders march forward to a final meeting with Limerick at Páirc Uí Chaoimh. Sub Darach Honan bagged a consolation goal for outclassed Clare in the final minute but the clock was against the Banner men, who will now attempt to regroup for the All-Ireland qualifiers.
***
Scorers for Cork: P Horgan 2-11 (1-0 pen, 1-11f), D Kearney & A Cadogan 0-3 each, C Lehane 0-2, D Cahalane, A Walsh, W Egan & P O’Sullivan 0-1 each.

Cork machine clicks into gear as Clare get rolled aside http://t.co/jAOb9BgTjj

It was a lovely sunny afternoon in Semple Stadium yesterday for this Munster SHC semi-final, yet only one third of the crowd that saw these sides contest two All-Ireland finals last year were there to see it.

It was a very different result also but a fair one, regardless of the justified sense of grievance from the Clare supporters at the imbalance in the refereeing in the first half. And their manager Davy Fitzgerald admitted as much. “There were other factors which I won’t get into,” he said. “I think the free count was 12-5 in the first half. Conor McGrath was absolutely pulled to pieces but no free. “But listen, Cork were faster, better and stronger than us all over the field and deserved their win. They killed us at midfield, were very dominant there. Fair play to them, they were very strong today.”

The big questions beforehand centred around preparation and how much of an advantage would Cork’s two games against Waterford prove, especially given that they are still blooding five newcomers to this year’s championship starting 15? How ready would Clare be, given that they haven’t had a competitive game in eight weeks? A major advantage was the answer to the first question. Not ready enough, the second.

Clare started well and were looking the sharper outfit in the opening 11 minutes at the end of which they led 0-5 to 0-3, courtesy of points from John Conlon and Podge Collins and three frees from Colin Ryan. Gradually, however, Cork began to get a foothold in the game and from there to just before half-time set the trend. Out-hustled. Out-muscled. Out-hurled. And outscored 1-10 to 0-5.

Clare managed a goal just before the break, a ball that could have and should have been cleared from inside the Cork square was pounced on and tapped home by John Conlon, leaving just three points between them at the break (1-13 to 1-10). Even at that stage though, and refereeing non-decisions notwithstanding, it was clear this wasn’t the Clare of 2013.

Midfielders Daniel Kearney and Aidan Walsh were the driving force for Cork. Walsh with some phenomenal leaping catches and both with great box-to-box runs. Defence though was the foundation and here Cork got their match-ups spot on.

Damien Cahalane — one of the championship newcomers — was named to start at full-back and there were fears his inexperience might be exposed by All Star Conor McGrath. It didn’t happen. Damien lining out instead at wing-back on Peter Duggan and giving a stellar performance. At full-back on McGrath was Stephen McDonnell — the Glen Rovers man was magnificent.

Christopher Joyce was switched from wing-back to the corner and again, an excellent game, quelling 2013 Hurler of the Year Tony Kelly. Shane O’Neill did likewise in the other corner on All Star Podge Collins.

The inside threat that had cost Cork last September thus neutralised, Mark Ellis and Lorcán McLoughlin also superb in the half-forward line, the new midfield pairing growing in dominance as the game progressed, it was now up to the Cork forwards to deliver. They did so, but here was the only imbalance in the Cork team.

Alan Cadogan was again lively, again causing problems, drawing several fouls from his marker Jack Browne while also scoring a fine point. Conor Lehane also did well in that half, two fine points, one after a little bit of stick magic to control the ball over the head of his marker.

Not for the first time, though it fell to Patrick Horgan to do the bulk of the scoring for Cork and not for the first time he delivered. All from placed balls, yes, a few of the simple variety for the Glen’s finest. Some weren’t, however, not least the goal he belted home from a 25m free left of centre in the 33rd minute, the score that really lifted Cork.

Into the second half and though again Clare started reasonably well, reducing the Cork lead to two points within eight minutes (1-15 to 1-13, Ryan with two pointed frees), again it was Cork looking the better side. And again, though Cadogan and midfielder Kearney came in with a fine brace apiece, it was Horgan doing the bulk of their scoring. The pick of his scores in this half was his penalty, awarded after a foul on Seamus Harnedy in the 59th minute, after Clare had made a bit of a run to reduce their deficit to four (1-20 to 1-16).

The new and temporary rule introduced by Croke Park last week states that a penalty or 20m free can’t now be struck from inside the 20m line. It proved no problem to Patrick. He placed the ball about four metres outside the line, a straight-forward two-step lift, bullet strike, and this game was decided. Sub Darach Honan managed a late consolation goal for Clare, but this day belonged to Cork.

No changes to the Cork Senior Hurling team to play Clare on Sunday: http://t.co/fCrsRjrgf6