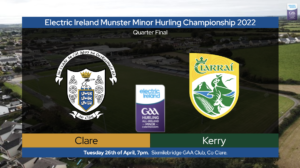 Early home blitzes effectively broke Kerry’s spirit as the Banner raided for the first eight scores of both halves to build up an unassailable lead. The visitors took the wind advantage but were quickly grounded by Clare attacking duo Oisin Whelan and Jack O’Neill who combined for all but two points of their side’s handsome 1-16 first half tally.

Centre-forward O’Neill impressed with four first quarter points from play while Whelan’s trio may have been accentuated by a goal but he was thwarted on two occasions. The Clarecastle target man did clinically find the net in the 23rd minute before finishing with Clare’s last four points to ensure a 1-16 to 0-4 interval cushion.

With full-forward Whelan adding four additional points on the restart to sandwich a 35th minute Cian Neylon goal to soar 2-23 to 0-4 clear by the two-thirds mark, both O’Neill and Whelan were withdrawn. James Organ took up the scoring responsibilities with four further points before the hour mark.

Kerry kept battling in vain, mainly through the leadership Jack Enright and Sean McElligott. However, following back-to-back wins, Clare have much-needed momentum for their trip to Cork at the penultimate stage next Tuesday evening.

This game will be live streamed by Munster GAA