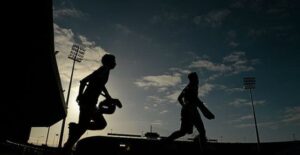 Limerick defeated Waterford by 0-27 to 3-15 in the oneills.com Munster Under 20 Hurling Championship Semi-Final on Wednesday April 27th at the TUS Gaelic Grounds.

Limerick advanced to the Munster U20 Hurling final following a tense three point victory over Waterford at the TUS Gaelic Grounds. The Treaty dominated the second half point scoring but three green flags from Waterford kept this game alive.

Waterford remain without a Munster final appearance at this grade since it was changed to U20, last winning U21 provincial honours in 2016. Limerick return to the showpiece, having been narrowly defeated by Cork on Leeside last summer. Just like the senior clash last week, goals brought Waterford close, but Limerick ultimately won by three points.

Limerick trio Aidan O’Connor, Adam English and Shane O’Brien impressed, contributing a combined 15 points from play – five each. Limerick looked to be striding to victory but Waterford’s bench made an impact to keep this contest alive.

The visitors were quick to settle into this contest and had the chances to race clear. Hitting six wides in the opening six minutes, long distance scores from Seamus Fitzgerald and Joe Booth were Waterford’s early plus points.

Limerick were accurate in the opening half, with five of their starting six forwards on target from play, while corner back Chris Thomas got his name on the scoresheet after 25 minutes to put over from 65 meters.

The Déise hit 10 first half wides, and would have been disappointed to have gone in level, 0-11 apiece.

Limerick hit eight unanswered coming out from the dressing room.

Substitute Cian Rellis goaled for Waterford in the 42nd. This was just their second score of the second half. Their second goal came when another sub, Jake Foley goaled on 54 minutes to bring them back into the contest.

The scoreboard read 0-23 to 2-13 at this point but Diarmuid Mullins’ side kicked on with Eddie Stokes, O’Connor (free) and O’Brien all finding scores.

Once again Gary O’Keefe’s side needed a goal and it arrived in stoppage time, as Patrick O’Connor’s 21-metre free found the net through a sea of bodies. This brought the gap back to three and the same player quickly added a point.

Ballybrown star Aidan O’Connor had the final say with a routine free after Patrick Kirby was fouled, O’Connor’s tenth point of the contest.

The final is slated for May 4th.

This game will be streamed live on TG4.ie and the TG4 App.