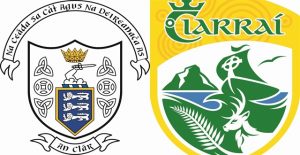 Shanagher does the trick for Clare

Clare made light work of defeating Kerry at Cusack Park in Ennis, handing out a 6-25 to 0-11 drubbing in a play-off game in the Munster minor hurling championship.

Having lost to Waterford in the opening round, the Banner were determined to get back to winning ways and, unfortunately for Kerry, they felt the backlash. Though Clare grabbed the opening score, a goal by full-forward Aaron Shanagher within 75 seconds, the opening half was not completely one-way traffic.

Credit to Kerry, by the 25th minute they found themselves only two points adrift (1-6 to 0-7). Clare boss Eamon Fennessy labelled his side’s first-half display as “diabolical”. Nevertheless Clare’s return of 1-4 to no score in the final five minutes of the opening half helped to steady a few nerves. In-form corner-forward Colin Corbett recorded Clare’s second goal on the stroke of half-time.

It proved to be the score that opened the floodgates in the second period. Clare outscored the Kingdom by 4-15 to 0-3 after half-time. Goals by Shanagher in the 39th and 50th minute plus two others from centre-forward Michael O’Shea and substitute Shane Conroy mortally wounded Kerry.

Next Round – the winners will play Tipperary at a Clare or Kerry venue in the second round Play-off game on Wednesday April 30th.