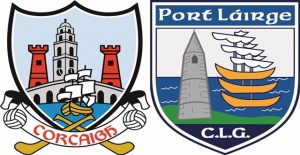 Cork defeated Waterford by 1-14 to 1-8 in the Electric Ireland Munster Minor Football Championship Semi-Final on Wednesday May 7th at Fraher Field Dungarvan.

It was not the cakewalk that the casual observer might have expected, but at the same time Cork’s victory over Waterford in the Munster MFC semi-final at Fraher Field last night was rarely in doubt. Leading by five points at half-time, Cork conceded the first two scores of the second half before seven points in a row made the game safe, even if Jack Mullaney’s late goal for Waterford helped to redress the balance on the scoreboard somewhat.

Cork manager Donal O’Sullivan accepted that it was far from a perfect performance by his side, but also felt they deserved praise for the way they dealt with what could have been a banana skin. “I’m not trying to be facetious when I say that we were coming down here and expecting a tough battle,” he said. “We got that and I think it’ll stand to our fellas. We challenged them at half-time to go out and dominate the first 20 minutes of the second half and, in fairness to them, they did that.”

A key factor in Cork turning with a 1-6 to 0-4 half-time lead was a penalty save by goalkeeper Colm O’Driscoll from Waterford’s star attacker Conor Gleeson in the 23rd minute, when a goal would have left just two points in it. “All night he was excellent,” O’Sullivan said. “That penalty save stopped their momentum at a key time, seven minutes to go until half-time and 1-4 to 1-2 would have made it anybody’s game. It was a crucial save because at the time we were struggling with a lot of silly mistakes.”

Playing with the considerable first-half breeze, Waterford needed to be in front at the break if they were to have any hope of causing an upset, but they fell behind to a pair of early Maidhc Ó Duinnín points for Cork. When Seán O’Donoghue finished well in the seventh minute with a low shot across Craig Brown following good work from Cian Kiely and Michael Hurley, the outcome looked as good as decided, but Cork were not without their own troubles.

Far too often, attempts at points were wayward and Hurley was not getting much change from dogged Waterford full-back Jack Guiry. At the other end, Gleeson was showing signs of danger for the hosts, and when Aaron Donnelly was fouled under a dropping ball in the large rectangle, it was he who stepped up. However, O’Driscoll produced a fine save, as he had in the fifth minute when Gleeson had created an opening from a quick Mullaney free.

To his credit, Gleeson converted a difficult free straight after that and then was unlucky to fire just over after evading a couple of tackles but, in injury-time, Cork added points from Shane Kingston and Damien Buckley to hold a five-point interval advantage. Joe Allen and Mullaney cut that to three again upon the resumption, but then Cork kicked into gear and it was the winning of the game.
Shane Kingston and Hurley both kicked some fine points, with goalscorer O’Donoghue and Séamus Ronayne also on target, as Cork finished with all six starting forwards on the scoresheet.

They had moved eight clear before Waterford restored some pride, Allen and Gleeson with points before Mullaney’s well-taken goal. Nevertheless, it is Cork who march on to face Kerry in a first final since 2010, when O’Sullivan was a selector and Brian Hurley’s late goal won it. “I’d take the same again!” he laughed. “I grew up next to Kerry football, so I’m delighted. I honestly think that they’ll win the All-Ireland but we’ll go down and do our best on the day and see what happens.”

Next Round – the winners play Tipperary or Kerry in the Munster Final on Sunday July 6th.

Ahead of Wednesday night’s clash with Waterford, the Cork management have kept faith with the same starting fifteen that defeated Limerick in the quarter-final. A number of players were involved in County Championship action with their clubs over the weekend, but all have come through unscathed.

Waterford are appearing in a Munster semi-final for the second year in a row. They lost in 2013 to Kerry by 1-15 to 2-6 at Fitzgerald Stadium, Killarney.

The last time Waterford reached the Munster Minor Football Semi-Finals in consecutive years was 2000 and 2001. On both occasions they lost to Kerry but by widely different margins. In 2000 at Fraher Field they lost by a single point – 0-15 for Kerry to 2-8 for Waterford. However, at Fitzgerald Stadium in 2001 Kerry were runaway winners by 7-13 to 1-7.

There have been 28 goals in the 5 games played so far in this year’s Munster championship, an average of 5.6 per game. Waterford lead the way with 8 goals from 2 games, followed by Cork with 6 from 1 game, Clare with 6 from 3 games, Limerick with 4 from 2 games and Kerry and Tipperary, each with 2 from 1 game.

Waterford have won 3 of their last 22 matches in the Munster Minor Football Championship.