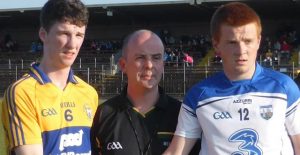 Photos from the game in Dungarvan

By Tomás McCarthy for the Irish Examiner newspaper

Joe Allen (2-4), Conor Gleeson (five points and three assists) and Conor Prunty (two goals) thrived in the free-scoring environment. On the opposite side, Keelan Sexton (2-5) drove a Clare comeback from nine points back with the full-forward line posting 1-7 between them.

Waterford coasted three goals clear (4-4 to 1-4) amid a flurry of first-half activity. Joe Allen produced an unstoppable drive just 12 seconds in, after being played in by Conor Gleeson. Allen added a point seconds later. The Banner were always dangerous and a swift turn by Evan Courtney after 14 minutes set up an opening for Darren Nagle to goal.

The Déise supplied Gleeson with regularity and The Nire frontman hit two points and played the final pass in three first-half majors. He transferred to Dylan Guiry who punched to the net after 16 minutes. Aaron Donnelly intercepted a Clare kickout six minutes later and, after an exchange with Gleeson, fired low and hard. Conor Prunty rounded off another move.

The visitors ate into that lead and brought it to within three. Keelan Sexton beat keeper Craig Brown and a pair of Aidan Davidson points left them only a goal behind (4-5 to 2-8). Waterford eased their anxiety when Conor Prunty slotted his second goal on 42 minutes after a pass from Allen. Two Allen points pushed them out to six with 10 minutes left (5-7 to 2-10). Two goals in 60 seconds from Keelan Sexton and Evan Courtney suddenly levelled a heart-thumping affair.

A brace of Conor Gleeson eased Déise nerves but Liam Madigan then made it a one-point contest. With a minute left Allen’s second goal settled it. Cork await in the final four.

Waterford advanced to the semi-finals of the Munster Minor Football Championship with a three-point win over Clare in a thrilling game which produced 10 goals at Fraher Field, Dungarvan on Tuesday night. The Déise are now back in the main draw and will play Cork in the Munster semi-final, with the game scheduled to take place on May 7 or 14 in Dungarvan.

In a crazy game, Waterford led by 4-4 to 1-4 at the break, but Clare drew level by the 51st minute at 4-10 to 5-7 before the hosts hit back with a late goal from Joe Allen to seal the win. Allen, Dylan Guiry, Aaron Donnelly and Conor Prunty got the Waterford goals in the first half, while Prunty and Allen both raised green flags again in the second half.

Next Round – the winners play Cork in the Munster semi-final on Wednesday May 7th or 14th.

The Waterford Minor Football team to play Clare tomorrow (Tuesday night) was named after training tonight. Best of luck to all concerned. Game throws in at 7.00pm in Fraher Field.

Clare have won at least one game in each of the last five seasons in the Munster Minor Football Championship and need a victory against Limerick to stretch that record to 6 seasons.

Waterford have won 2 of their last 21 matches in the Munster Minor Football Championship.