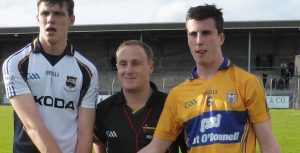 By Eoghan Cormican for the Irish Examiner Newspaper

Drama and cards aplenty in Ennis last night as Clare cruised into the penultimate round of the Munster MHC. Impressive as their second-half showing may have been, Clare’s comprehensive victory stemmed largely from the three red cards shown to Tipperary’s Willie Connors, Tommy Nolan and Chris McCullagh. Of particular weight in determining the outcome was the first red card handed out by referee Nathan Wall just before half-time and, indeed, the only dismissal you could argue against.

Clare goalkeeper Jason Loughnane, upon gathering a long delivery, attempted to side-step the close attention of Nolan, but was caught on the neck by the butt of the corner-forward’s hurley. Granted, it was a lazy effort on the part of Nolan to halt Loughnane’s progress, but certainly not demanding of a straight dismissal. It capped a contentious half-hour in which Wall had already dished out three yellow cards, drawing the ire of both sets of fans in the 1,218 crowd.

Tipperary appeared to brush off Nolan’s dismissal when pointing in the opening seconds of the second half, stretching their lead to 0-11 to 0-9. It followed a first-half display where half-forwards Stephen Quirke and Alan Tynan caused real problems, scoring all but one of their 0-10 total. Andrew Coffey’s early second-half minor, however, would prove their last score for 28 minutes, in which time they were hit for 1-14 and incurred a further two red cards.

Clare manager Eamon Fennessy accepted the red card shown to Nolan was a turning point given the visitors had shaded the opening exchanges. “The first sending-off seemed to unsettle them,” he said. “We got the lads in at half-time, regrouped and told them they weren’t hurling to their potential. We struck a few early scores and took momentum from there.

“All our preparation centred on taking the game to Tipperary, we did that and thankfully we came out on the right end. They are the ones that set the standard in the first-half, we had to come to their level, we did but we did it the hard way. “This is a new group with very few survivors from last year and so every game is bringing them on.”

Aaron Shanagher led the Clare onslaught, his converted penalty on 50 minutes ending the game as a contest. Connors conceded the penalty for a wild pull on Ian Galvin. The corner-back received a straight red and was soon joined in the stand by substitute McCullagh after his needless challenge on Shanagher.

Clare advanced to the semi-final of the Munster Minor Hurling Championship following a 14-point defeat of Tipperary in Cusack Park, Ennis on Wednesday night. The Banner County have earned a rematch against Waterford in the semi-final in late June, having lost to the All-Ireland champions by 1-13 to 0-11 in the quarter-final three weeks ago.

Eamonn Fennessy’s side negotiated their way through the ‘back door’ after that defeat to the Déise, first beating Kerry and then by securing an impressive win over Tipperary tonight. Clare were 0-10 to 0-9 down at half-time, but Tipperary had Tommy Nolan sent off just before the break and really struggled in the second half.

Aaron Shanagher, who hit a hat-trick of goals against Kerry last week, hit the back of the net from a 20-yard free to put the Banner men 1-18 to 0-11 ahead in the final quarter. Clare had hit nine points without reply before that. Tipperary finished with 12 men, losing Willie Connors and Chris McCullagh to further red cards in the closing stages. Shanagher finished the game with an impressive tally of 1-13 for the winners.

The Tipperary team to play Clare in Wednesday’s Munster Minor Hurling Championship match shows 3 changes from the side which lost to Limerick in the first round. Bill O’Connell, Liam McCutcheon and Michael Dunne come in to the team in place of Chris McCullagh, Willie Coffey and Shane Hennessy.

Clare have made two changes for the game from the side which defeated Kerry last week. Ciaran Cooney replaces Declan Power at corner-back while Liam O’Donovan comes in at corner-forward with Colin Corbett moving to wing-forward as Darren Chaplin drops to the bench.

Next Round – the winners will play Waterford in the Munster semi-final on June 25th or 26th.

Kerry made a welcome return to the Munster championship this year. In 2012, when they last competed, they lost both their games – the first against Tipperary and the second against Cork. 2013 was a good year for them as they won the All Ireland Minor Hurling B championship defeating Meath by 1-19 to 3-9 in the final.