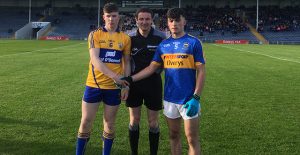 Clare defeated Tipperary by 1-9 to 2-4 in the Electric Ireland Munster GAA Football Minor Championship Semi-Final on Tuesday May 8th at Semple Stadium Thurles.

Banner finish with a flourish

Clare 1-9 Tipperary 2-4: A strong finish by Clare yielded three points and clinched their place in the Munster minor football semi-final at the expense of a disappointing Tipperary side before 885 spectators at Semple Stadium last night.

The win was no more than Clare deserved as they were the more enterprising team throughout but they made life difficult for themselves with some erratic shooting, off target no fewer than 16 times in a game of moderate standard.

The throw-in was delayed for over 20 minutes due to the late arrival of the Clare side and this may have explained their slow start which saw Tipperary hit the front with a Max Hackett goal after eight minutes.

In a lacklustre first half, in which both sides were guilty of handling errors and poor shooting, Tipperary should have had a second goal after 25 minutes but Sean O’Connor failed to convert after being set up by Kyle Shelley.

It was an expensive miss and a brace of Shane Meehan points just before the break had Clare hot on Tipperary’s heels at half-time, with the home county leading 1-2 to 0-4.

Four minutes after resuming, Clare hit the front when Kevin Keane netted with Tipp defenders claiming a square ball, but referee David Murnane awarded the goal after consultation with his umpires.

A minute later, Cian McDonagh blazed wide for Clare with the Tipp goal at his mercy. Clare were the dominant side and Shane Meehan extended their advantage, 1-5 to 1-3, after 41 minutes.

Tipperary were level after 42 minutes when Christy English slipped his marker to crack home a fine goal and with five minutes of actual time to play, there was still deadlock between the sides.

In the closing minutes, Clare found an extra gear. Firstly Emmet McMahon pointed a 45 for the lead. A minute later, Shane Meehan extended their advantage and, in injury-time, Meehan clinched the victory with his fifth point, sending Clare forward to meet Kerry in the Munster final.

Clare fully deserved their win but they will have reservations about slack finishing and some basic handling errors which need to be addressed before the final. Shane Meehan and Emmet McMahon led by example but Cillian Rouine, Cian McDonagh, and John Murphy also had big games.