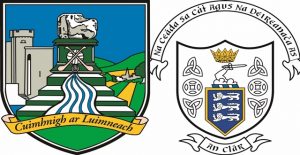 Limerick defeated Clare by 3-18 to 0-13 in the Bord Gais Energy Munster GAA Hurling Under 21 Championship Quarter-Final on Monday May 7th at Cusack Park Ennis.

Limerick have beaten Clare in the U21 Munster Quarter-Final. Check out the full-time highlights here! pic.twitter.com/PV0fCwTaAz

Conor Boylan and Seamus Flanagan both hit 1-2 as the reigning All-Ireland U-21 champions defeated Clare in the Munster quarter-final at Cusack Park in Ennis. Brian Ryan also scored six points from play, and substitute Mark O’Dwyer added a goal just after his introduction late on. Limerick completely dominated the first half and should have held a more substantial lead, than their 0-10 to 0-8 interval advantage. But after Conor O’Halloran was sent-off Limerick wore Clare down, and the goals arrived in the final quarter.

Limerick began well and senior star Flanagan was a big presence in the full-forward line. Kyle Hayes was dominant in the half-back line too, and they built from there. The visitors scored three points in a row, with Boylan the first to find his range inside the opening minute. Points from Barry Murphy and Ryan followed and Clare looked in real trouble. Michael Corry replied with a badly needed effort in the sixth minute, but that was cancelled out by Ryan and Darren O’Connell. And Flanagan got his deserved point in the 14th minute. The Feohanagh clubman moved out to the half-forward line where he began to supply some brilliant passes inside, and Limerick continued to win all the personal battles apart from some inspired play from Clare captain Jason McCarthy.

Aidan McCarthy’s point in the 15th minute was a timely reprieve and Clare trailed by 0-7 to 0-3 when Gary Cooney scored shortly after. The teams went point for point, but Clare didn’t go away, and despite some erratic shooting they were still right in the game as it approached half-time. However, Ryan was in fine form and scored his fourth point from play while Murphy’s second opened up a 0-10 to 0-4 lead in the 25th minute. Limerick looked to be in control but Clare rallied before the interval, and points from Padraic O’Loughlin, Gary Cooney and Aidan McCarthy (two frees) meant they only trailed by 0-10 to 0-8.

But O’Halloran’s red card in the 32nd minute, for a clash with Darren O’Connell, was a turning point. Clare stayed in the game with McCarthy’s frees, he finished with six points, but Limerick hammered home their advantage once Flanagan scored the crucial goal. That arrived in the 45th minute, Boylan found the net eight minutes from time, and O’Dwyer sealed the victory with his first touch.

Ticket Information
Adult: €10.00
Under 16s: Free
Student/OAP receive €5 concession on full priced adult tickets with valid id prior to entry at the designated stile.
This is an unreserved seating fixture

Tickets available to buy in advance in participating Centra and Supervalu outlets.

Pick up a copy of Monday’s 32 page souvenir match programme for 3 euro.

This morning GAANOW Rewind takes a look back to the 2014 U21 @MunsterGAA Quarter Final between @LimerickCLG and @GaaClare, as they play each other in the Munster quarter final this weekend! pic.twitter.com/iMBvkcNggW