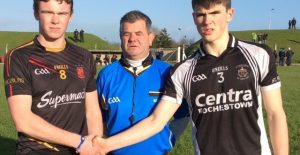 St Francis College, Rochestown 4-11 Ard Scoil Rís 1-17: Dr Harty Cup semi-final: Not since Midleton CBS’s win of 2006 has a Cork school inscribed its name on the Dr Harty Cup, but the possibility of that run ending remains a live possibility after this Charleville cracker.

On Saturday, Rochestown’s St Francis College continued their pitch for the perfect season and maintained hopes of an incredible quadruple with a fine all-round performance against holders Ardscoil Rís. The O’Callaghan Cup (Cork SAHC) is already in the cabinet, the final of its football equivalent (Simcox Cup) is approaching and next Saturday they face St Brendan’s of Killarney in the Corn Uí Mhuirí semi-final.

A first-ever Harty would cap it all and selector Diarmuid Fahy expressed his delight after an impressive win. “It’s a massive achievement for the school,” he said. “They kept their heads all through, they were fantastic.

Though the point-scoring sights will have to be calibrated before the final against Thurles, it was otherwise hard to fault Rochestown. Seán Powter’s two goals were a great reward for his industry while 1-3 and 1-2 respectively from Ciarán Cormack and Shane Kingston won’t surprise any observers of underage hurling in Cork.

John Cashman and David Griffin at full- and centre-back, switched from their usual posts, helped to lead a good defensive effort and at midfield John O’Sullivan ran himself to a standstill, scoring one point but involved at the coalface for countless others.

Rochestown enjoyed a dream start, up 0-6 to 0-2 and 0-7 to 0-3 inside 20 minutes despite playing against the wind. Kingston went close to an early goal too, but there appeared to be an inevitability about how Ardscoil began to claw their way back into the game.

Ronan Lynch led the charge as they drew level only for Powter to fire to the net for ‘Roco’ on 28 minutes after he had extracted the ball from a scrum of players. Even still, though, Ardscoil managed to tie matters by half-time, Peter Casey with two fine points and then Nathan Fox with a long-range effort.

Casey and Lynch then put the Limerick school ahead for the first time early in the second half, but when the difficult questions were asked, Rochestown had the answers. Diarmaid O’Mahony levelled from halfway after Griffin had batted down a ball he shouldn’t have got to, and then Kingston struck for a goal, cracking a powerful shot from the right after he had created the chance himself.

Casey’s fifth point left just two in it, but then Rochestown bagged a third goal. Kingston’s long-range goal attempt looked speculative but it required goalkeeper Seán Mullane to parry the ball and Powter slid in to force the ball over the line. Points from Lynch kept Ardscoil within touching distance but once more Rochestown came up with a goal when required and the best was saved until last. O’Sullivan played a nice ball to Powter and his pass was beautifully controlled by Cormack, who applied a lovely finish.

That made it 4-10 to 0-15, but even then Ardscoil weren’t lying down. Lynch added two more frees to bring his tally to nine points, though when Daniel Meaney pointed in injury time it looked to have decided the outcome. There was time for Ardscoil to win a late penalty but though Lynch drilled that home, it was the last action. The final awaits for Rochestown.

“A lot of the lads will be playing next Saturday again against Brendan’s but they’re managing well,” Fahy said. They’re well looked after in their clubs, which is very important too. The support from them and the school community is fantastic. There are a lot of wise heads on young shoulders.”

GOALS WERE CRUCIAL for St Francis College, Rochestown, whose dream season continued as they dethroned Dr Harty Cup holders Ardscoil Rís in their semi-final at Charleville today. Rochestown only trailed once in the whole game, after points from Aaron Gillane and Ronan Lynch had put Ardscoil 0-12 to 1-8 clear early in the second half, but the response was emphatic.

Diarmaid O’Mahony’s point levelled matters before Shane Kingston netted in the 41st minute. Though the impressive Peter Casey responded for Ardscoil, Rochestown’s third goal arrived soon after as Seán Powter slid in for his second green flag after Seán Mullane had saved from Kingston.

Like any good champions, Ardscoil died hard as Lynch pointed twice and then, after a point from Rochestown midfielder John O’Sullivan – who was excellent throughout – the Limerick side were awarded a penalty. Lynch drilled his shot past the three men on the line to give himself a personal tally of 1-9 and leave just three points in it, but it proved to be the last action.

In the first half, Rochestown had led by four points on two separate occasions but poor shooting was costly and Lynch had helped Ardscoil to level by the 26th minute. While Powter’s first goal gave Rochestown breathing space again, points from Casey (two) and Nathan Fox left it level at the break. In their first ever Dr Harty Cup final, Rochestown will play Thurles CBS on Saturday, 21 February.

When – Saturday January 31st at 3pm

Extra time to be played if necessary

Paths to the Quarter-Final