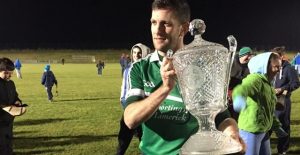 Limerick defeated Cork by 3-20 to 1-16 in the Waterford Crystal Cup Final on Saturday January 31st at Mallow.

Limerick secured the first silverware of the year in Mallow when claiming their first Waterford Crystal Cup since 2006 in a commanding display that saw them defeat Cork by ten points.

Despite meeting in the last two Munster finals and also going toe- to-toe in Division 1B of the Allianz League last year, this was the first ever decider between the neighbouring counties in this provincial competition, a prospect that attracted 2,145 hardy souls to Mallow.

It was a very open and entertaining contest typifying a pre-season competition as all but three points of the 40 scores came from play, a statistic that impressively including all of Limerick’s tally. Limerick held the upper hand in the opening half after been rocked into life by Stephen Moylan’s eighth minute goal for the hosts which eased Cork 1-2 to 0-2 clear.

It appeared to be the jolt that Limerick required as within four minutes, they had cancelled out the Rebel’s advantage before hitting the front with an opportunistic 14th minute goal from Gavin O’Mahony. The Kilmallock player, who was allowed to play due to a suspension for his club’s All-Ireland Semi-Final next weekend, intercepted on the 45 metre line and burst through unchallenged to billow the net at 1-06 to 1-02.

The visitors would maintain that healthy cushion, thanks in the main to inspirational scoring contributions from wing-back Tom Condon and teenage sensation Cian Lynch who would both finish the half with three points apiece. Damien Cahalane and Cian McCarthy performed best for Cork at either end of the pitch in that period to keep their side in touch, however that good work would be outdone just before the break when goalkeeper Patrick Collins spilled a routine catch and Adrian Breen was on hand to give Limerick a 2-11 to 1-09 advantage.

In an effort to get back on track, Cork emptied their experienced bench in the third quarter, with Seamus Harnedy, Marc Ellis, Christopher Joyce, Patrick Horgan and Conor O’Sullivan all being introduced to good effect. The home side would reduce the arrears to three by the 50th minute while Horgan also fired a bullet off the crossbar that somehow ricocheted wide.

Limerick’s response epitomised the character of the current side however as they outscored their frustrated opponents by 1-6 to 0-2 in a strong finish that included a second goal for Breen in the 57th minute. Cork’s attempts on goal proved in vein as Limerick exacted revenge for last year’s double defeat in league and championship deciders and also got a much needed boost ahead of their latest league promotion charge.

When – Saturday January 31st at 7pm

Stephen McDonnell remains on the injured list, is progressing well and is expected to be back in action in coming weeks. Both the CIT and UCC players are unavailable for Cork panel selection as they are tied to their respective academies for this competition.

We will have full live commentary of the @MunsterGAA Waterford Crystal final between Limerick and Cork on Saturday from 6:50 in Mallow

Delighted to host the Waterford Crystal Cup Senior Hurling Final this Saturday @carrigoon between @OfficialCorkGAA and @LimerickCLG at 7pm.

Since the Waterford Crystal Cup began in 2006, Clare (21 wins) and Tipperary (19 wins) have the most wins in the competition.

Tipperary hold the record for the longest winning streak in the Waterford Crystal Cup since the competition began under that guise in 2006 when they won 10 consecutive matches between 2007 and 2009.

Since the Waterford Crystal Cup began in 2006, there has been just 1 draw – the 2012 Limerick v Clare Quarter-Final after two periods of extra time.

Clare are the only team who have won at least one game each year since the Waterford Crystal Cup competition began in 2006.